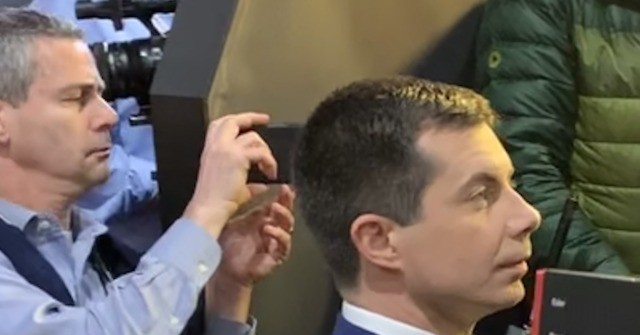 DES MOINES, Iowa — Former South Bend, Indiana, Mayor Pete Buttigieg ran away from reporters’ questions in the spin room after the Democrat debate at Drake University on Tuesday evening, continuing a pattern of avoiding questions from the media after debates.

Buttigieg made a rare appearance on the spin room floor for exclusive interviews with two cable news networks. But just as he has done on previous occasions, he refused to answer any spontaneous questions from other reporters. An aide rushed Buttigieg through the scrum and towards the exit as he ignored questions posed by Breitbart News and other media outlets.

The young presidential candidate, one of the last six survivors of a Democratic National Committee debate process that rewards candidates for reaching arbitrary benchmarks of donors and poll numbers, behaved similarly when he first appeared in the spin room at the Democrat debate in Houston in September. (The Iowa debate marked the first time he actually stepped on the spin room floor; in Houston, he stayed behind a rope line.) On that occasion, he ran away from Breitbart News national security correspondent Kristin Wong as she attempted to ask him a question about the war in Afghanistan.

Here’s @PeteButtigieg running away from me as I asked whether he supported pulling out troops from #Afghanistan in a year. 😒😒😒 pic.twitter.com/m7cxMf1NF6

The decision to avoid reporters in the spin room appears to be a deliberate strategy by the Buttigieg campaign, perhaps in an attempt to avoid gaffes or difficult questions. President Donald Trump took the opposite approach in his primary run in 2015-2016, often lingering in the spin room for more than an hour to talk to as many reporters as cared to ask him anything.

Former Vice President Joe Biden has never made an appearance in the spin room over six debates. Sen. Bernie Sanders (I-VT) has stopped appearing in the spin room since suffering a heart attack last fall. Sen. Elizabeth Warren (D-MA) usually talks to reporters in the spin room but did not make an appearance after the Iowa debate. Sen. Amy Klobuchar (D-M) made a limited appearance, while businessman Tom Steyer lingered for several minutes to answer questions from reporters.