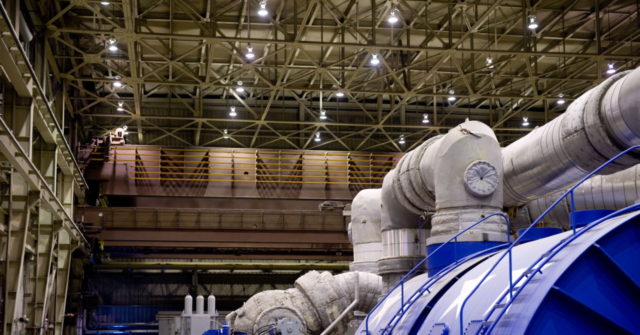 The six candidates on the Democrat debate stage on Tuesday in Iowa vowed to put an end to America’s energy prosperity, including the United States’ first-time status as the world’s top producer of oil and natural gas.

Here is what the candidates said they would do if elected President of the United States:

I want to hit reality here. I serve on the agriculture committee, and I will never forget going to Crawfordsville here in Iowa, and thank you for bringing up Iowa, Brianne, since that is where we are. I went to this plant, and there was one worker left in that plant. That plant had been shut down because of Donald Trump’s trade policies and because of what he had done to those workers, with giving secret waivers to oil companies and ruining the renewable fuel standard.

Klobuchar responded after a moderator asked, “Senator Klobuchar, some of your competitors on this stage have called for an all out ban on fracking, you haven’t, why not?”

Well, first of all, I would note that I have a 100 percent rating from the League of Conservation Voters and that is because I have stood tall on every issue that we have talked about up here, when it comes to this administration, this Trump administration, trying to reverse environmental protections. I think it is going to lead to so many problems and one thing that hasn’t been raised by the way is the rules on methane, which is actually one of the most environmentally dangerous hazards that they have recently embarked on. And I would bring those rules back as well as a number of other ones.

When it comes to the issue of fracking, I actually see natural gas as a transition fuel. It’s a transition fuel to where we get to carbon neutral. Nearly every one of us has a plan that is very similar and that is to get to carbon neutral by 2045 to 2050, to get to by 2030 do a 45 percent reduction. And I want to add one thing that no one’s really answered. When we do this, we have to make sure that we make people whole and when we put a tax on carbon, which we will do, either through CAP and trade or through a renewable electricity standard or through a fee on carbon.

Billionaire Tom Steyer’s fortune came in part from investing in fossil fuels, but he now opposes them:

Steyer responded after a moderator asked:

Mr. Steyer, to clarify, you say you’re the climate change candidate, but you made your $1.6 billion in part by investing in coal, oil, and gas. So are you the right messenger on this topic?

I absolutely am. Look, we invested in every part of the economy and over 10 years ago I realized that there was something going on that had to do with fossil fuels, that we had to change. So I divested from fossil fuels. I took the giving pledge to give most of my money away while I’m alive. And for 12 years, I’ve been fighting the climate crisis. I’ve beat oil companies in terms of clean air laws. I’ve stopped fossil fuel plants in Oxnard, California. I fought the Keystone Pipeline. I have a history of over a decade of leading the climate fight successfully.

Sen. Elizabeth Warren (D-MA) wants to end all oil and gas production on federal lands, something Trump has expanded under his presidency:

Climate change threatens every living thing on this planet and the urgency of the moment cannot be overstated. I will do everything a president can do all by herself on the first day. I will roll back the environmental changes that Donald Trump is putting in place. I will stop all new drilling and mining on federal lands and offshore drilling. That’ll help us get in the right directions. I’ll bring in the farmers. Farmers can be part of the climate solution. We should see this though for the problem it is. Mr. Steyer talks about it being problem number one. Understand this, we have known about this climate crisis for decades. Back in the 1990s, we were calling it global warming, but we knew what it was. Democrats and Republicans back then were working together because no one wanted a problem.

But you know what happened? The industry came in and said, we can make big money if we keep them divided and make no change. Priority number one has to be taking back our government from the corruption. That is the only way we will make progress on climate, on gun safety, on healthcare, on all of the issues.

Sen. Bernie Sanders (I-VT) said the world is on fire because of fossil fuels causing climate change, and he supports the Green New Deal, which would end the use of fossil fuel and air travel, among other radical economic transformations:

Let’s be clear, if we as a nation do not transform our energy system away from fossil fuel, not by 2050, not by 2040, but unless we lead the world right now, not easy stuff, the planet we are leaving our kids will be uninhabitable and unhealthy. We are seeing Australia burning. We saw California burning. The drought here in Iowa is going to make it harder for farmers to produce the food that we need. This is of course a national crisis. I’ve introduced legislation to indicate it’s an actual crisis. We have got to take on the fossil fuel industry and all of their lies and tell them that their short term profits are not more important than the future of this planet. That’s what the Green New Deal does. That’s what my legislation does and that is what we have to do.

My response is back in 1986, I introduced the first climate change bill and check Politifacts, they said it was a game changer. I’ve been fighting this for a long time. I headed up the Recovery Act, which put more money into moving away from fossil fuels to solar and wind energy than ever has occurred in the history of America. Look, what we have to do is we have to act right away and the way we act right away is immediately. If I’m elected president, I’ll reinstate all the mileage standards that existed in our administration, which were taken down, that’s 12 billion gallons of gasoline, barrels of gasoline to be saved immediately. And with regard to those folks who in fact are going to be victimized by what’s already happened. We should be investing in infrastructure that raises roads, makes sure that we’re in a position where we have … every new highway build is a green highway.

We can create, and this is where I agree with Tom, we can create millions of good paying jobs. We’re the only country in the world that’s ever take great crisis and turn it into a great opportunity. And one of the ways to do it is with farmers here in Iowa, by making them the first group in the world to get to net-zero emissions by paying them for planting and absorbing carbon in their fields right away.

This issue’s personal for me. That’s why we’re going to tackle climate from day one. It’s why we’ve got to make sure that we have better answers than we do today.

Now, what I’ve noticed is pretty much all of us propose that we move on from fossil fuels by the middle of the century, starting with actions that we take right now. The question is how are we going to make sure any of this actually gets done? Because people have been saying the right things in these debates for literally decades.

The other day in Winterset, there was a kid at one of my events. Raised his hand, and he pointed out that he expects to be here in his nineties, in the year 2100. He will sit in judgment over what we do, not just what we on this stage do, anyone old enough to vote right now, whether we actually put together the national project it will require to meet our climate goals, to act aggressively, not just rejoining the Paris Climate Accord. That’s table stakes, but to actually move on from the fossil-dependent economy we live in today.

In October, the Trump administration released a fact sheet on his energy-related accomplishments, including the advancement of the domestic oil and gas industry:

The next Democrat debate will take place on February 7 in New Hampshire.