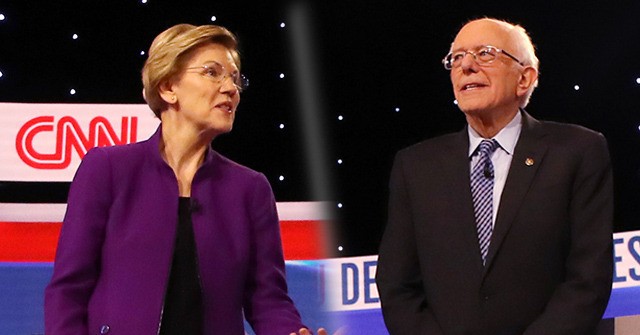 Sen. Elizabeth Warren (D-MA) engaged in “collusion” with CNN in “one of the most egregious calculated hit jobs that we’ve ever really seen in modern political history,” independent journalist Michael Tracey told Breitbart News, referring to allegations made by Warren — and leaked to CNN — that Sen. Bernie Sanders (D-VT) privately told her a woman could not win the 2020 presidential election.

“CNN totally accepted the framing of Warren’s side of this quote-unquote argument being correct,” said Tracey, describing the CNN moderator’s question for Sanders concerning the allegation at Tuesday’s Democrat debate in Des Moines, IA. “It was choreographed by the Warren campaign with an assist from CNN. They leaked this story — attributed to sources — to CNN the day before CNN was hosting the debate, and they knew it was obviously going to be asked at the debate, and Warren had pre-prepared talking points at the ready, so what you really have to describe this as, I think, is collusion — remember that word? — between the Warren campaign and CNN.”

Tracey explained, “[Elizabeth Warren]  actually is working alongside a corporate media outlet to take down the leading candidate of the left, and it’s ironic, because Warren was widely touted as Bernie’s most loyal ally, and they had this so-called pact, which, of course, was never going to hold, because as Warren’s campaign gained a measure of momentum over the past year, she brought on many Hillary Clinton-style retreads — people within the Democratic Party’s sort of institutional apparatus who you just knew deep down were never going to be content with Bernie. And they brought on a whole set of people who, I guess, have successfully lobbied for Warren to depict herself now, in this sort of last ditch effort to regain the lead, as the champion of women.”

Warren seeks to use her sex as a political commodity, added Tracey, “[Elizabeth Warren] telegraphed, weeks ago, that she was now going to be presenting herself as the first woman candidate, and to use that as a central argument for why she was the most desirable candidate to be nominated.”

“[This] looks like a total ambush,” said Tracey of CNN’s Wednesday release of audio capturing a post-debate exchange between Sanders and Warren.

Mansour asked if Warren knew her post-debate exchange with Sanders would be captured and publicly shared by CNN.

“Of course she did,” replied Tracey. “The entire thing was orchestrated. That’s what’s so craven about it.”

He also noted that some media figures are using the language of the #MeToo movement in discussing the Sanders-Warren disagreement.

“It’s not just random trolls on the Internet trying to appropriate the #MeToo nomenclature in reference to this episode,” observed Tracey. “It’s high-profile journalists with a lot of influence like Julia Ioffe, who is widely touted as a leading expert — mostly on Trump-Russia stuff, where she’s totally failed, so it’s not surprising to me that she would fail in her analysis of this situation.”

Tracey continued, “Just think of how despicable that is. Whatever you think of #MeToo, the whole concept that you need to believe women or at least give women more of a benefit of the doubt was intended to apply specifically to situations where there was ambiguity around claims of sexual assault. And they’re now transposing that onto a dispute between two politicians, one of which happens to be a man and one of which happens to be a woman. So it’s a total manipulative distortion of that entire concept.”

Warren’s coordination with CNN may damage her credibility among those on the left, speculated Tracey.

“It’s ironic, because if you had said a year ago that Elizabeth Warren would end up employing tactics that actually exceed anything Hillary [Clinton] ever dared to try in 2016 in terms of sleaziness, I think I would’ve gotten a lot of people who would say, ‘No, there’s no way that would ever happen.’” Tracey said. “But this is, I think, qualitatively worse than anything Hillary tried to pull off, because, number one, Hillary didn’t perceive Bernie as as much of a threat in 2016 as Bernie is now, because he’s leading in some of the polls, he’s definitely in contention to win the first few contests, and Hillary —  I’m not giving her, necessarily, credit for this — but when she did attack Bernie it was at least about issues, like she accused him of being complicit in the Sandy Hook shooting because of gun control stances he had had in the past, etc., so that was definitely sleazy, but this was just an act of blatant political betrayal, because it entails Warren confiding what had previously been a private conversation — that [was] held in confidence — and then weaponizing that to put the worst possible spin on it in service of orchestrating this last ditch smear attempt, which has now gone on a couple of days.”

“I don’t know how effective it will be,” Tracey continued. “I’m obviously not the target audience of it because I find it to be incredibly cynical and cheap, but I think there are still some people in the Democratic primary electorate who have lingering resentment toward Bernie because of their perception, I think falsely, that he harmed Hillary egregious in 2016, and so if Warren now is presenting herself as the last stand for female power in the party or something, then maybe it could actually work to her benefit. I don’t know. I think it may end up damaging them both, which again, I think, is incredibly ironic, because I personally have been told that Warren is the greatest ally that Bernie could ever want, and I also get people telling me that Tulsi Gabbard is like the evil imposter who is just trying to cause chaos in the Democratic Party. But it turns out that Warren is a much greater offender, and actually, Tulsi Gabbard came to Bernie’s defense after this really spilled out into the public on Monday, just like she did in 2016 when she resigned from the DNC to endorse him. So I feel like people who have had a certain conception of the role Warren’s playing in the context of this primary have some egg on their faces.”

Binder asked why Warren would hold such a claim to herself since 2018, when she alleges Sanders made the aforementioned remark about a woman’s inability to be elected to the White House.

Tracey responded, “That tells you, again, how blatantly calculated this was, right? Because she sat on the information for over a year and timed it for a couple of days after Bernie got a couple of good polls, one showing him in the lead in Iowa.”

Tracey speculated about how this incident will be received by Democratic primary voters.

“I think there’s a certain species of primary voter who would feel that their negative perceptions of Bernie are being reinforced by this, and so they might actually appreciate it. And so they don’t think too deeply about the issue of sordid coordination between one campaign and one corporate media outlet.” Tracey said. “If you’re a highly engaged consumer of news, and you have some critical faculties in terms of how you analyze it, then you can kind of understand the basic cynicism of this stunt.”

Tracey continued,”But for others, they’re sort of more casual news consumers. They’ll just glance at a headline or they’ll see some highlight clips, and they’ll say, ‘Whoa! Bernie’s long-time ally who I thought he agreed with on most things is now saying that he was a closet misogynist. Wow, that’s kind of bad for Bernie, right?’ So that’s one breed of primary voter, and there’s another, again, this kind of highly engaged set, many of whom you’ll see debating online who now, I think, feel like Warren has showed her true colors if she’s willing to, again, actively collude with this corporate media outlet to maximize the damage inflicted on the most unapologetic socialist candidate that the Democratic Party has fielded in modern history.”

“Even if you don’t agree with socialism, right, you have to acknowledge that’s sort of a remarkable development, and people who are onboard with that project are going to be extremely defensive if they feel like they’re being ganged up upon in a way that is not ethical,” added Tracey. “I hope it just reinforces that there is no need fundamentally, for these corporate media outlets to pay such an outsized role in the process.”

“The cravenness of this exercise is going to cause people to reevaluate how they think about the role of the media in relation to the candidates,” Tracey predicted. “If even somebody [like Elizabeth Warren] who is seen as this stalwart progressive ally could engage in one of the most egregious calculated hit jobs that we’ve ever really seen in modern political history, I think it’s just going to increase [voters’] level of alienation from the predominant means by which political media are transmitted.”