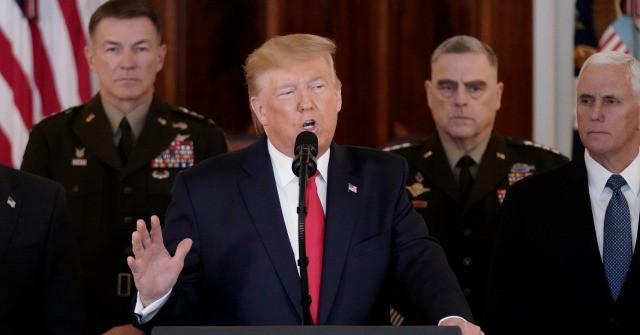 TAMPA, Florida — Vice President Mike Pence told Breitbart News in an exclusive interview that through a variety of actions as U.S. commander-in-chief and leader of the free world, President Donald Trump has demonstrated that he “leads from a standpoint of strength.”

Pence, asked to define the “Trump Doctrine” in the wake of the president’s decision to order an airstrike that eliminated terrorist and Iranian Quds Force leader Gen. Qasem Soleimani this month, explained that Trump’s track record as president is one that demonstrates that he leads from a position of “strength.” This is the second part of Pence’s exclusive interview with Breitbart News in Florida on Thursday, a campaign swing on which Breitbart News accompanied him to and from Joint Base Andrews in the D.C. suburbs on Air Force Two and his campaign bus up the all-important I-4 corridor from Tampa to Orlando.

“The president would be best to articulate that, but what I can tell you is that leaders around the world know we have a president who once again embraces America’s role as leader of the free world,” Pence said when asked to define the Trump Doctrine. “He leads from a standpoint of strength.”

The president’s unique approach to leadership, the vice president told Breitbart News, can be seen in America’s dealings during his presidency with allies and with adversaries alike—and it is different than previous administrations. Examples of dealing with allies include the recently approved U.S.-Mexico-Canada (USMCA) trade agreement, which Pence discussed in the first part of his exclusive interview with Breitbart News, or working with European partners to strengthen NATO commitments—which have increased significantly since Trump became president.

“He’s demonstrated a willingness to engage countries all over the world, allies and adversaries, but to do so from a position of strength,” Pence said.

Regarding North Korea in particular, the vice president told Breitbart News that while President Trump has been negotiating with the regime—including the “historic” Trump-Kim summit—he has not relented on sanctions and will not until Kim agrees to full denuclearization.

“With regard to North Korea, we’ve seen the president’s historic summit, but different than past administrations, there’s been no sanctions relief,” Pence said. “The president has made it clear: no nuclear weapons in North Korea and that there would be no sanctions relief until Kim Jong-un stepped forward and agreed to complete, verifiable, and irreversible denuclearization.”

Concerning China, which is a different kind of adversary in that it is much more of a “strategic and economic competitor” of the United States, Pence said that President Trump has taken a “very similar” approach, that he began with building a personal relationship with Chinese President Xi Jinping, then made clear what the U.S. positions on matters of trade and international relations are, then used the economic power of tariffs to force China to the negotiating table, which resulted in this week’s just-signed phase one trade deal with China and the beginning of broader negotiations with Beijing.

“The strong stand the president has taken with China is very similar,” Pence said. “China is a strategic and economic competitor. The president first started with President Xi. He’s engaged President Xi. He’s forged a very strong relationship with President Xi. But at the same time, he followed through on what he promised. He imposed tariffs on hundreds of billions of dollars of Chinese goods. We said the era of economic surrender is over. We brought China to the table, and yesterday’s phase one deal is a beginning of a new relationship with China that is built on reciprocity and free trade and fair trade. The negotiations will continue over a broader trade agreement from there.”

The president, Pence said, has been willing to use not just America’s economic power to advance the country’s interests around the world, but also the nation’s military might. This was initially on display in the first year of the Trump administration when the president launched missile strikes against Syria’s Assad for his use of chemical weapons. Pence specifically noted that former President Barack Obama did not enforce a “red line” he created concerning Assad regarding chemical weapons in Syria, and that sent a signal of weakness to other American adversaries around the world, such as Russia, which shortly thereafter stormed into Ukraine and seized then-annexed Crimea with its military. Pence said that Trump, on the other hand, has made clear to U.S. adversaries that such actions are not acceptable and will not be tolerated.

“With regard to military strength, the last administration drew a red line in the sand, and when Assad in Syria crossed it, did nothing,” Pence told Breitbart News. “Not only did that result in hundreds of thousands of lost lives in Syria, but it was shortly thereafter that Russia overran Crimea and Russian surrogates compromised eastern Ukraine. Contrast President Obama’s leadership with President Trump: President Trump declared that the use of chemical weapons would have severe consequences. The difference between Obama—when chemical weapons were used—is we launched 50 cruise missiles.”

Pence also pointed to the “progress” the Trump administration has made in the fight against radical Islamic terrorism, including the complete and total decimation of the entire physical ISIS caliphate, the raid that killed al-Baghdadi, and the airstrike that eliminated Soleimani.

“The progress we’ve made against radical Islamic terrorism, the defeat of the territory of the Islamic caliphate, taking out al-Baghdadi, the defeat of terrorism, and removing of one of the most dangerous terrorists in the world, Qasem Soleimani—after 20 years,” Pence said. “I spoke with a father today whose son fell in Iraq in 2007. He wept. He came to the rally today in Tampa to tell me how much he supported President Trump’s decision to take out Qasem Soleimani because his son Joshua had fallen at the hands of an IED in Iraq provided by the Iranian Revolutionary Guard under the leadership of Qasem Soleimani. So I really believe that it’s peace through strength, and it’s a demonstrated willingness to use America’s military might when America’s lives or America’s interests are at risk.”

Asked in a follow-up question if President Trump’s actions are sending a message to world leaders, friend and foe, Pence noted that the president’s rebuilding of the American military—and his demonstrated willingness to use that military might when necessary, along with broader engagement on economic and geopolitical matters that the administration has led—have shown the world Trump is a man of his word.

“I think the combination of historic investments in our national defense, a demonstrated ability of when American lives and American interests are at stake to use that military strength, combined with the president’s engagement with the wider world—I really believe it’s sent a message,” Pence said. “Again, I think you can sum this president up that the world knows when it deals with President Donald Trump that he says what he means, and he means what he says.”

More from Pence’s exclusive interview with Breitbart News in Florida is forthcoming.