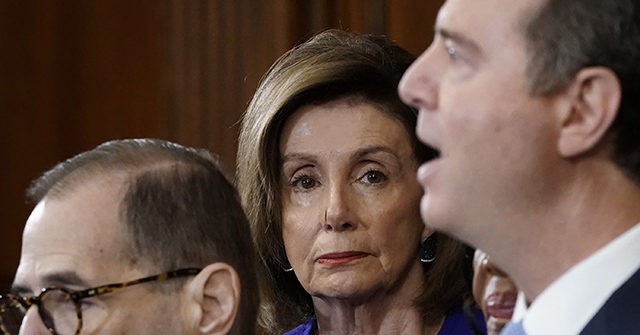 House Democrat leaders pursuing the removal of President Donald Trump from office appear reluctant to let go of their investigation after voting to impeach him last month, even after Speaker Nancy Pelosi transmitted the articles of impeachment to the Senate this week.

“Plainly, there are loose ends here that the House should have tied up and that, importantly, the House is continuing to investigate,” former Assistant U.S. Attorney for the Southern District of New York Andrew McCarthy wrote in an editorial Wednesday, the day House Speaker Nancy Pelosi (D-CA) finally handed over the articles of impeachment to the Senate.

McCarthy, who currently serves as the senior fellow at National Review Institute and a National Review contributing editor, suggested postponing the impeachment trial unit the House finishes its inquiry.

By handing over the articles of impeachment to the Senate, Pelosi is supposed have passed the baton of the impeachment process to the upper chamber, but some House members refuse to let go of their inquiries into Donald Trump.

The House already did its part — it voted to impeach Trump on December 18, charging him with two articles — abuse of power and obstruction of Congress.

In a press release issued on the day before Pelosi transmitted the articles to the Senate on Wednesday, House leaders pursuing the impeachment inquiry against Trump conceded that they continued to investigate the president after the lawmakers voted to impeach him and charge him with the two articles.

The chairmen of the House Committees on Oversight and Reform, Foreign Affairs, and Intelligence declared in a joint statement:

After repeatedly saying impeaching Trump was an urgent national matter, Pelosi chose not to hand over the articles of impeachment for weeks until this past Wednesday. Republicans accused the Speaker of trying to exert control on how the upper chamber conducts its part of the process — the trial to acquit or remove Trump from office and possibly to allow House leaders more time to investigate Trump.

Senate Majority Leader Mitch McConnell rejected Pelosi’s ploy to try to tell the Senate how to conduct its business, saying, “There will be no haggling with the House over Senate procedure.”

On the eve of Pelosi transmitting the articles to the Senate, House Intelligence Committee Chairman Adam Schiff (D-CA) indicated that Democrats might continue with their inquiry after the Senate receives the articles.

“Despite unprecedented obstruction by the president, the [House Intelligence] Committee continues to receive and review potentially relevant evidence and will make supplemental transmittals,” Schiff declared.

The House judiciary panel is charged with compiling the complete record of the impeachment probe ahead of the Senate’s trial.

Schiff sent Nadler “additional records and other materials related to the impeachment inquiry” produced by Lev Parnas, an associate of Trump’s personal lawyer Rudy Giuliani, pursuant to a subpoena.

At the end of October, Breitbart News warned that the approval of the House Democrats’ impeachment inquiry resolution would officially authorize probes into Trump that are unrelated to the subject at hand.  The approved expansive resolution authorized any ongoing Trump investigations under the sun.

House Democrats, however, appear intent on introducing new evidence and request the deposition of new witnesses during the Senate trial, a prospect the GOP-controlled upper chamber is unlikely to indulge.

The Senate began its impeachment trial to remove or acquit (the most likely outcome) President Trump on Thursday.

On Wednesday, Kevin McCarthy acknowledged that the House was likely  continuing with its probe even after Pelosi handed over the articles.

Two things happened simultaneously on Wednesday: (a) The House of Representatives transmitted to the Senate two articles of impeachment approved on straight partisan lines a month ago, and (b) the House’s impeachment inquiry — yes, it’s still very much alive — highlighted new, relevant evidence it has turned up about the activities in Ukraine of President Trump’s personal lawyer, Rudy Giuliani, and Giuliani’s associates.

House Democrats rushed through the investigation, forgoing salient witnesses and evidence, because of the political calendar. The charges are weak, and the inquiry was needlessly short-circuited, so Democrats have continued investigating the premature allegations. Now they are publicly disclosing newly acquired evidence, with the promise of more to come.

It appears some House members are reluctant to stop their inquiry and are trying to pressure the Republican-controlled Senate to help them remove the leader of their party.