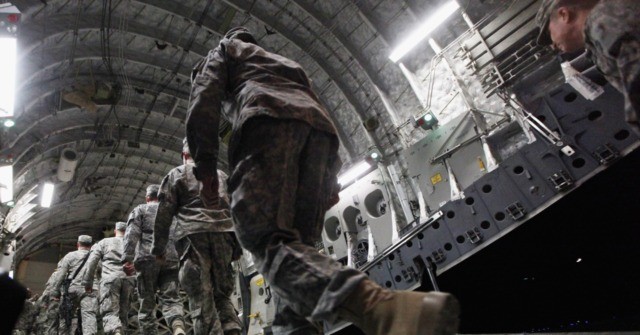 “While no U.S. service members were killed in the Jan. 8 Iranian attack on Al Asad Air base, several were treated for concussion symptoms from the blast and are still being assessed,” Captain Bill Urban, a spokesman Central Command, told reporters in a statement Thursday. “As a standard procedure, all personnel in the vicinity of a blast are screened for traumatic brain injury, and if deemed appropriate are transported to a higher level of care.”

Those affected were mostly flown out to America’s military base in Germany. Three of the 11 flew out to Kuwait, he said.

“When deemed fit for duty, the service members are expected to return to Iraq following screening. The health and welfare of our personnel is a top priority and we will not discuss any individual’s medical status,” Urban’s statement concluded.
Concussions are injuries that typically arise from brute force to the head or violent shaking; those affected by the missile attacks were likely close enough to be impacted by the force of the missile if not the ensuring fire.

“Some concussions cause you to lose consciousness, but most do not. It’s possible to have a concussion and not realize it,” according to the Mayo Clinic, which adds that most who suffer concussions survive. The degree of severity of a concussion can vary widely, affected by the impact generating it as well as personal details like the patient’s history or if they have previously suffered concussions already.
ABC News noted in its report on the Central Command confirmation that medical privacy laws prevent the military from elaborating on the severity or any details of the injuries documented.

The Pentagon’s confirmation that no American soldiers had died in the attack – over a dozen ballistic missiles launched out of Iran towards two Iraqi airbases hosting American troops – Iranian state propaganda insisted that “dozens of U.S. troops had been killed and injured” on Friday.

“Speaking on Thursday, head of the Aerospace Division of the Islamic Revolution Guards Corps (IRGC) Brigadier General Amir Ali Hajizadeh said dozens of U.S. troops had been killed and injured in the operation,” the state-run PressTV outlet reported. “According to Hajizadeh, the U.S. military conducted at least nine sorties of C-130 flights after the missile strikes, taking wounded personnel to Jordan and Israel while Chinook helicopters transferred the injured to the U.S. hospital in Baghdad.”

The Pentagon has provided no evidence that any of those facilities have taken in injured American soldiers.

Following the missile attack on January 8, at least four Iranian outlets cited Islamic Revolutionary Guard Corps (IRGC) “sources” who claimed to know that 80 American soldiers died as a result of the missile launches. One of the outlets, Fars News Agency, claimed another 200 Americans injured, significantly less than the 11 confirmed by the Pentagon.

“According to the accurate reports of our sources in this area, at least 80 American terrorist troops were killed and some 200 others were wounded, who were immediately transferred out of the airbase by helicopters,” an “informed source” told the Mehr News Agency, another state-run outlet. “Despite the fact that Americans had been on high alert, their air defense was unable to respond.”

None of Iran’s outlets reporting this news has corrected their original articles.

The Iranians also claimed this week that their attack had thwarted American activity against the Islamic State in Iraq, contradicting reports from journalists in Iraq that the U.S. had resumed regular cooperation with Iraqi and Kurdish militaries against the Sunni jihadist group.

President Donald Trump also provided an initial assessment at odds with Thursday’s statement from the Pentagon.

“All is well! Missiles launched from Iran at two military bases located in Iraq,” Trump said on Twitter following the bombing. “So far, so good!”

“I’m pleased to inform you the American people should be extremely grateful and happy,” he said in public remarks later that night. “No Americans were harmed in last night’s attack by the Iranian regime.”

The missile attack was a response to an American airstrike this month taking out Iranian Major General Qasem Soleimani, the head of the IRGC’s Quds Force. The Quds Force is an external terrorism unit, responsible under Soleimani for hundreds of deaths and injuries of American soldiers as a result of roadside bombings.

The Quds Force also played a significant role in attacks on civilians in Syria to cement the control of dictator Bashar al-Assad. At the time of his death, Soleimani was in Baghdad, reportedly helping the regime kill and injure civilians protesting Iran’s growing influence in the country.

Hundreds of Iraqis took the streets of Baghdad in the last months of 2019 against Baghdad allowing Iranian officials sweeping control of the nation’s politics.