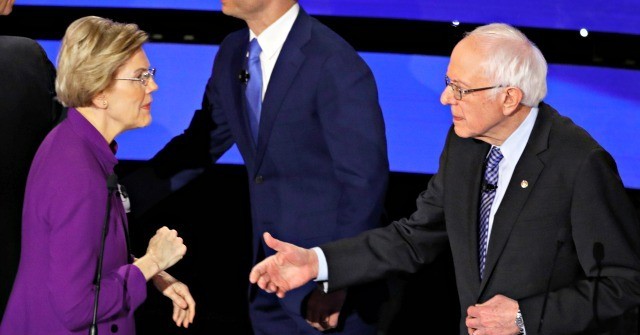 “There are ups and downs in campaigns, but I have tremendous admiration and respect for Senator Warren,” Khanna, who joined both senators in a “strategy call” with the pro-Iran group National Iranian American Council (NIAC) this month, told Hill.TV.

“You have to look at campaigns for what they are, and I have no doubt that the progressive movement needs her leadership as well,” Khanna said of Warren.

“I agree with a lot of the groups who have been saying let’s get the progressives all marching in the same direction,” he added.

Eighteen progressive groups, including Progressive Democrats of America, Roots Action, the Working Families Party, and Justice Democrats, signed a “unity pledge” this week, encouraging fellow Democrats to focus on corporate Democrats and President Trump rather than each other:

“For those with a declared preference, this statement in no way signals the slightest decrease in that commitment,” the groups said, some of which have endorsed Sanders and others of whom back Warren.

The statement, they say, is:

…a shared declaration of our belief that the surest way to defeat Trump is for the Democratic Party to nominate either Warren or Sanders, as these are the candidates best able to energize voters by providing a vision of a decent society and a fair economy.

Sanders and Warren, as well as their campaigns and supporters, will need to find ways to cooperate. The crossfire amplified by the media is unhelpful and does not reflect the relationship between two Senate colleagues who broadly worked well together for most of the last year. We hope to build solidarity between delegates affiliated with these two candidates prior to the convention and will encourage the campaigns to work towards a unified convention strategy after the final primaries on June 2nd.

The call for unity follows a wave of growing political tension that materialized after Sanders disputed a CNN report, which alleged that he told Warren at a prior meeting in 2018 that he did not believe a woman could win the presidency.

While he vehemently denied the allegation at the Democrat debate in Iowa, CNN’s Abby Phillip, seconds after his denial, asked Warren, “What did you think when Sen. Sanders told you a woman could not win the election?” — a question Warren did not take issue with.

Warren refused to shake Sanders’ hand after the debate and told him, “I think you called me a liar on national TV.”