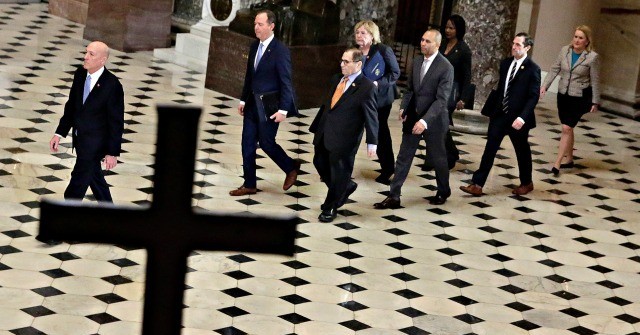 House Democrats on Saturday filed a 111-page legal brief detailing their case for impeaching President Donald Trump ahead of the Senate’s upcoming trial.

The filing reiterates their claim that the president is guilty of abuse of power and obstruction of Congress and outlines evidence they plan to present to the upper chamber next week. The document reads:

The evidence overwhelmingly establishes that he is guilty of both. The only remaining question is whether the members of the Senate will accept and carry out the responsibility placed on them by the Framers of our Constitution and their constitutional Oaths. History will judge each Senator’s willingness to rise above partisan differences, view the facts honestly, and defend the Constitution.

President Trump’s ongoing pattern of misconduct demonstrates that he is an immediate threat to the Nation and the rule of law. It is imperative that the Senate convict and remove him from office now, and permanently bar him from holding federal office.

Further, the brief, authored by the seven House impeachment managers, asserts the president’s actions are the culmination of “the Framers’ worst nightmare.”

The development comes as President Trump’s legal team argued Saturday that the House Democrats’ two articles of impeachment are “constitutionally invalid” and must be rebuked by the Senate.

The articles of impeachment are constitutionally invalid on their face. They fail to allege any crime or violation of law whatsoever let alone ‘high crimes and misdemeanors’ as required by the Constitution.

“The articles of impeachment now before the Senate are an affront to the Constitution of the United States, our democrat institutions, and the American people,” the blistering letter added.

The development comes after House Speaker Nancy Pelosi bowed to pressure from Republicans and several Democrats in the Senate by transmitting the articles to the upper chamber. The move ended a near four-week stand-off with Senate Majority Leader Mitch McConnell (R-KY), in which she failed to force the Kentucky Republican to bow to her and Senate Minority Leader Chuck Schumer’s (D-NY) demands to agree on a roster of witnesses and rules for evidence.

McConnell slammed the pair’s demands as a “non-starter” and a “fantasy” and confirmed this week that the trial will finally begin as early as Tuesday.

“We’ll be able to go through some preliminary steps here this week, which could well include the Chief Justice coming over and swearing-in members of the Senate and some other kind of housekeeping measures…which would set us up to begin the actual trial next Tuesday,” he told reporters on Tuesday.