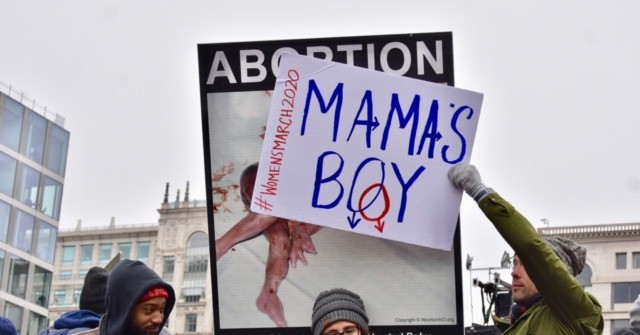 Breitbart News captured footage of Women’s March attendees clashing with pro-life activists during Saturday’s march in Washington, D.C., where thousands of pro-choice activists took to the streets to protest the Trump administration, as well as attempt to silence members of the pro-life movement calling on them to support a child’s right to life.

“Abortion is a savage act of violence against innocent children,” he added, while pro-abortion activists surrounded him, chanting, “My body, my choice.”

“Abortion is not justice, in fact, it’s the ultimate act of oppression, and we’re gonna take a stand for the voiceless children scheduled to die at Planned Parenthood today,” he added.

In another video, Women’s March activists can be seen surrounding a female activist from the pro-life organization Created Equal, as they attempted to block her pro-life message with their pro-abortion signs.

Another pro-life activist nearby then called the women out for not supporting “all women.”

“No, shame on her,” countered one pro-abortion activist.

“No, you can have a different opinion,” responded the pro-life woman. “Free speech, ma’am. That’s how it works.”

“Our free speech is to be right next to her, [blocking her],” insisted the Women’s March attendee.

“You can’t block and her and try to shut her down,” countered the pro-life woman. “That’s not how it works.”

In a third video, pro-abortion activists can be heard blowing whistles, further attempting to silence a nearby Created Equal member.

“Women’s March only supports born women, not pre-born women, that’s not equality,” said the Created Equal activist while the whistles blared around her.

“Every human life began at fertilization, every embryologist knows that,” she added. “It’s not debated. It’s not a scientifically contested fact.”