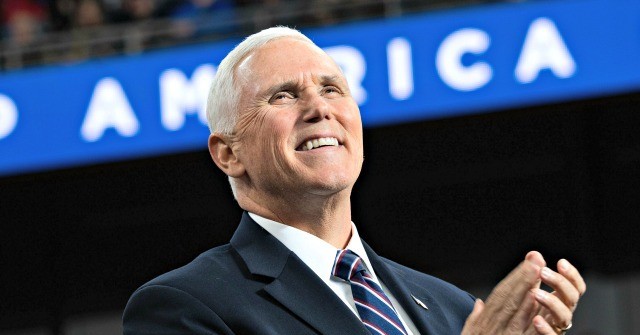 TAMPA, Florida — Vice President Mike Pence told Breitbart News exclusively that “the American people have a right to know” when it comes to the wide-scale corruption of his predecessor, former Vice President Joe Biden, and Biden’s family members.

Pence’s comments came during an interview with Breitbart News on a campaign swing through Tampa and Orlando, Florida, on which Breitbart News joined him on Air Force Two and on the President Donald Trump re-election campaign bus.

Pence was asked to respond to the news that President Trump had moments earlier tweeted out a link to a Breitbart News story on how the forthcoming Peter Schweizer book Profiles in Corruption: Abuse of Power by America’s Progressive Elites is now the most anticipated book release forthcoming, according to Amazon.

Schweizer, a senior contributor to Breitbart News, is the president of the Government Accountability Institute (GAI) and the author of many bestselling books on corruption in the Washington swamp.

Amazon Calls ‘Profiles in Corruption’ the ‘Most Anticipated’ Nonfiction Book https://t.co/sOQcs3OHS4 via @BreitbartNews

This particular book is set to expose much more about Biden than has been previously known, connecting several more family members of the former vice president beyond his son Hunter Biden to the web of corruption. The book will expose “the Biden Five,” as Breitbart News has previously reported and Schweizer has written in an op-ed for the New York Post on the matter this weekend.

“I’d say a couple things. The American people have a right to know,” Pence told Breitbart News when asked about the book and the broader corruption questions swirling around Biden. “This president has said we’re going to drain the swamp. Joe Biden has been a part of the Washington establishment for decades. As he’s campaigning for the highest office in the land, the American people have the right not only to ask the questions but to get answers.”

Also asked if he thinks Hunter Biden should be called to testify in the upcoming U.S. Senate impeachment trial over the House’s impeachment of Trump, Pence said that is up to Senators—but noted that the talk of witnesses is a sign of how weak the House’s case against Trump really is.

“But obviously, completely separate from that, when it comes to the Senate trial, it’ll be for the senators to decide, but I think the fact that you hear people talking about witnesses in the Senate just proves how weak the case underpinning the Articles of Impeachment really is,” Pence told Breitbart News. “The fact that we’ve heard they had an open-and-shut case, that despite the fact the American people can read the transcript, see the fact the president did nothing wrong, no quid pro quo, the military aid was released. The American people have the facts. We heard that Congress did what the facts demanded, and now suddenly we hear Democrats saying they need more facts and they need more witnesses. My view on this is the American people see through all of this—the sham investigation followed by a partisan impeachment. They’re saying ‘enough is enough.’”

Pence’s interview with Breitbart News came on the Trump campaign bus on a ride from Tampa to Orlando, after he had given a speech earlier at a rally and made an impromptu stop at a local sandwich shop in Tampa. The Vice President said that people told him in that sandwich shop that they’re ready for the impeachment sham to end.

“During that diner stop today in Tampa, I stopped at one table where one of the men looked at me and said, ‘We’re ready to get this over with,’” Pence said. “The American people see a president who’s working to make the country more secure, make the country more prosperous, strengthen the country in our courts with constitutional conservatives, and they see Democrats in this relentless effort to overturn the will of the American people in 2016. I think they’re ready, ready to move on.”

Pence added that it is his view that the right way to have these debates is on the campaign trail in 2020, and that he is certain President Trump will be re-elected.

“Let’s go fight this out in the election, and give the people a choice – and I got to tell you I have no doubt in my mind that as we take this president’s record all across the country, we’re going to get four more years of President Donald Trump in the White House,” Pence said.

Asked in a separate question what the biggest success of the Trump administration is that nobody is talking about that will help him and the president get re-elected in November, Pence pointed to a number of different things, including the rebuilding of the military and the launching of the Space Force.

“It would really be hard to pick. As the father of a United States Marine, and the historic investments we’ve made in our national defense, I think are a source of great pride,” Pence said. “The establishment of the first new branch of our armed forces in 70 years—the United States Space Force—will contribute to the ability of our armed forces to defend this nation on land, at sea, in the air, and in space for generations to come. What the president has done for the economy, what the president has done for the Constitutional foundations of our courts will also pay dividends for decades. But I think maybe the greatest contribution is, everywhere I go across the country, despite unprecedented opposition from liberal Democrats in Washington, DC, is the American people see a nation that’s more secure, a defense that’s stronger than ever before, an economy that’s stronger than ever before, they see someone defending their values and defending their freedoms. People are standing tall again.”

This is the fourth and final part of Pence’s exclusive interview with Breitbart News. The interview also covered the U.S. Senate passage of the U.S.-Mexico-Canada (USMCA) trade agreement, the upcoming U.S. Senate impeachment trial of Trump, and Pence’s views of the “Trump Doctrine” on foreign policy. More from Pence’s trip to Florida, on which Breitbart News accompanied him this week, is forthcoming.