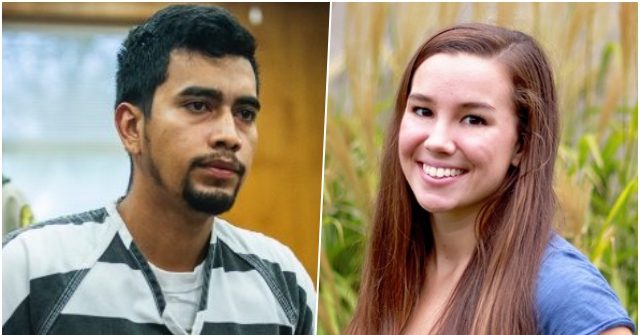 The illegal alien accused of murdering 20-year-old Mollie Tibbetts is sticking to his defense that his murder confession is void because he was sleep-deprived, a new motion filed in court details.

In August 2018, Cristhian Bahena Rivera, a 25-year-old illegal alien from Mexico, was charged with Mollie Tibbetts’ murder after police said he admitted to confronting and chasing down the young woman.

Following a nationwide search, Tibbetts’ body was found in a cornfield in Poweshiek County, Iowa. The illegal alien lived in a region of Iowa that was surrounded by sanctuary cities, as Breitbart News noted. He worked on a dairy farm using a stolen ID and Social Security card after allegedly crossing the U.S.-Mexico border as a child.

A motion filed by Bahena Rivera’s defense attorneys sticks to a defense witness’ claim that the illegal alien’s murder confession — in which he allegedly confessed to killing Tibbetts to local police — was merely in reaction to a lack of sleep.

The defense is asking that the Iowa State Supreme Court intervene in a recent ruling in which District Judge Joel Yates said crucial evidence, such as portions of the confession and blood stains taken from Bahena Rivera’s car, would be admissible in court.

In the motion, obtained by Fox News, the defense asks the Supreme Court to review allowing portions of the murder confession in court as they claim sleep deprivation caused Bahena Rivera to admit to Tibbetts’ murder.

Also, the defense is asking for the trial to again be delayed at least until Tibbetts’ boyfriend, Dalton Jack, returns from his overseas deployment with the United States Military.

Over the last year and a half, Bahena Rivera has successfully had the murder trial against him moved to February 2020 and had his trial moved after he claimed that the county where the trial was originally set to be heard had a population that was too white and not Hispanic enough.

According to prosecutors, Bahena Rivera was the last person who saw Tibbetts jogging on the evening of July 18 in Brooklyn, Iowa. That is the night Tibbetts went missing.

Bahena Rivera, according to police, said Tibbetts was jogging when he saw her. That is when he said he approached Tibbetts and started talking to her. After Tibbetts told Bahena Rivera that she would call the police if he did not stop following her, the illegal alien allegedly chased her and “blacked out” after this.

Police believe Bahena Rivera stabbed Tibbetts to death and drove to a cornfield where prosecutors say he placed corn stalks over her to hide her body. The illegal alien has been held on a $5 million bond.