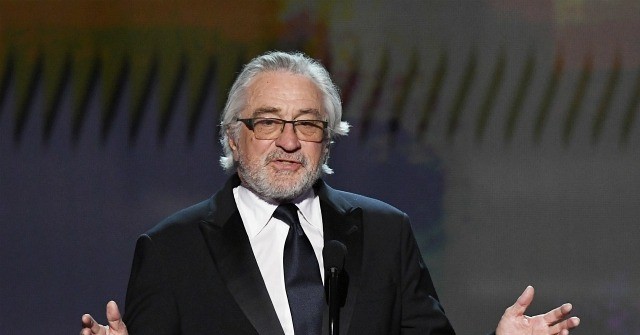 Actor Robert De Niro took aim at President Donald Trump while accepting his lifetime achievement award at the SAG-AFTRA Awards in Los Angeles on Sunday. But the vehemently anti-Trump star was in a relatively restrained mood, stopping short of calling out the president by name.

“As a citizen, I have as much right as anybody — an actor, an athlete, a musician, anybody else — to voice my opinion,” the actor continued. “And if I have a bigger voice because of my situation, I’m gonna use it whenever I see a blatant abuse of power.”

The Irishman star added: “And that’s all I’m gonna say about that tonight.”

Thank you, #RobertDeniro, for using your platform for the greater good, including tonight at the #SAGAwards.

His comments elicited enthusiastic applause from the crowd of Hollywood stars assembled at the Shrine Auditorium, including Meryl Streep, Brad Pitt, and Charlize Theron.

He continued:  “I can imagine some of you are saying, ‘Alright, alright. Let’s not get in to politics.’”

“But we’re in such a dire situation so deeply concerning to me and to so many others, I have to say something.”

De Niro was this year’s recipient of the Screen Actors Guild Life Achievement Award, which recognizes an actor’s career achievement. The award was presented to him by fellow actor Leonardo DiCaprio.

The Raging Bull star has used his appearances at awards ceremonies and other public events to rail against President Trump.

At the annual Tony Awards in 2018, De Niro broke out into a profane tirade, yelling “I’m going to say one thing: ‘Fuck Trump’!”

Last month, De Niro was a guest on filmmaker Michael Moore’s Rumble podcast during which the actor advocated for physical violence against the president.

“I’d like to see a bag of shit right in his face. Hit him right in the face like that, and let the picture go all over the world,” De Niro said.