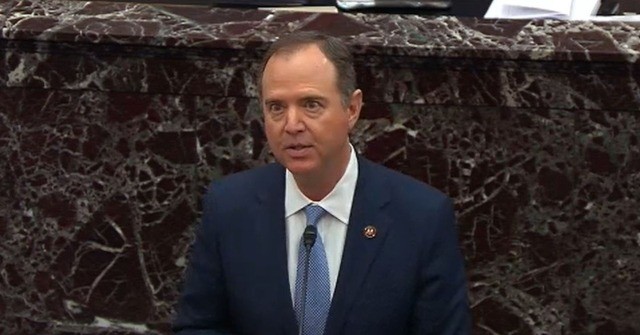 WASHINGTON, DC — House Intelligence Committee Chairman Adam Schiff (D-CA) argued on Tuesday that a refusal by the Senate to agree to Democrats’ demand to allow new witnesses and evidence in the impeachment trial without a vote would deem President Donald Trump guilty regardless of the verdict.

In other words, if the Republican-led Senate does not carry out the impeachment trial the way the Democrats want it to, Trump will be considered guilty even if the upper chamber acquits him. A guilty verdict in the Senate would remove Trump from office.

If the Senate and the senate leadership … will not allow the calling of witnesses or the presentation of documents, If [Senate Majority Leader Mitch] McConnell makes this the first impeachment trial in history without witnesses or documents, it will not prove the president innocent. It will merely prove the Senate guilty of working with the president to obstruct the truth from coming out, so I do think that by structuring the trial this way, it furthers our case that what’s going on here really is a cover-up of evidence to the American people.

While McConnell says his newly unveiled resolution outlining the rules that will govern the Senate trial makes the process fair, Schiff argues otherwise, saying the guidelines “make it impossible to hear a fair trial.”

The Senate, nevertheless, is expected to approve the resolution.

Speaking from the Senate’s floor on Tuesday, McConnell noted that the resolution that lays out the rules for how Senators will carry out the impeachment trial allows for a vote on whether both parties can introduce new evidence and witnesses.

McConnell made it clear that he will not pre-commit to allowing new evidence before hearing the Democrats’ arguments for convicting Trump. Moreover, he acknowledged that no one pushed the House’s hand to rush the impeachment inquiry, noting that they could have waited for more evidence if they thought it necessary.

McConnell stressed that the GOP-led Senate would not do the Democrat-controlled House’s investigation.

Key congressmen have recently threatened to call new witnesses to testify in the House if the Senate does take their deposition. They have also said they are continuing with their impeachment inquiry. Their comments came after House Democrats transmitted the two articles of impeachment — abuse of power and obstruction of Congress — to the Senate, a move that is supposed to end the House’s role in the impeachment process.