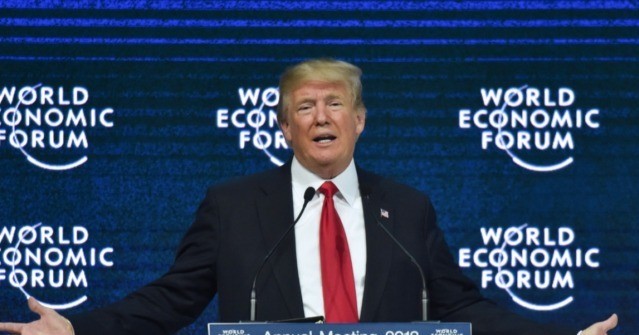 President Donald Trump on Tuesday said America’s new nationalism should be a model for the rest of the world’s prosperity and is the only bulwark against socialism.

“A nation’s highest duty is to its own citizens. Honoring this truth is the only way to build faith and confidence in the market system,” Trump said at the World Economic Forum meeting in Davos, Switzerland.

Trump celebrated the “blue-collar boom” that has led to a revival of manufacturing, rising wages, and ultra-low unemployment in the U.S. while decrying alarmists who would respond to the challenges of climate change with socialism.

“These alarmists always demand the same thing: absolute power to dominate, transform, and control every aspect of our lives,” Trump said. “We will never let radical socialists destroy our economy, wreck our country, or eradicate our liberty.”

“In America, we understand what the pessimists refuse to see: that a growing and vibrant market economy focused on the future lifts the human spirit and excites creativity strong enough to overcome any challenge, any challenge by far,” he said.

Trump urged the rest of the world to emulate America’s pro-worker nationalism.

“A pro-worker, pro-citizen, pro-family agenda demonstrates how a nation can thrive when its communities, its companies, its government work together for the good of the whole nation,” Trump said.