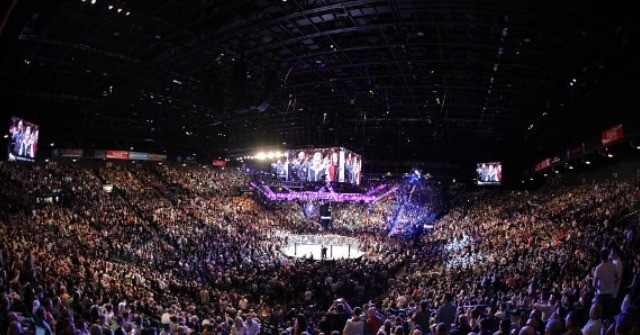 MMA fighter Fallon Fox twice broke an opponent’s skull to win matches and now he is being praised by some in the LGBT community.

Outsports, a sports news website that focuses on LGBT issues in sports, named Fox the “bravest athlete in history” in a recent article written by Cyd Zeigler. Fox, who is a biological male fighting physically weaker females and inflicting life-altering harm, apparently qualifies as brave because, according to Zeigler, “she was the target of a torrent of hatred I have literally never seen targeting an LGBTQ athlete.”

As intense as the “hatred” Fox may have been subjected to, it’s highly unlikely that the social media comments directed his way ever fractured his skull. The title of bravest athlete would have been much more appropriately bestowed on the biological females who dared to enter the cage with a fighter they had no hope of matching in terms of power and athletic ability.

The Post Millennial posted a commentary on Fox and the women he was in the ring with:

Fox, a male to female transgender athlete, destroyed Erika Newsome in a Coral Gables, FL, MMA fight during which she “secured a grip on Newsome’s head… With her hands gripping the back of Newsome’s skull, she delivered a massive knee, bringing her leg up while pulling her opponent’s head down. The blow landed on Newsome’s chin and dropped her, unconscious, face-first on the mat.” That was Newsome’s last pro fight.

But to Outsports, a male-bodied person beating a female bodied person unconscious constitutes bravery. Not only has Fox beat up women in the ring, won every match but one, but has weathered online attacks from the likes of Joe Rogan. I think we can all agree that getting back online after Joe Rogan has knocked you down is far braver than facing another male-bodied of your own muscle mass and size in a fight.

Fox also beat Tamikka Brents, giving her a concussion and breaking 7 orbital bones. But that’s super brave, too, taking an unfair, male-bodied advantage and using it to give female-bodied opponents brain injuries.

Vice also defended Fox in its account of his career: “Fallon was born with a peen. No one’s perfect. I throw away too much salad. She was raised as a dude, as I am told is traditional in Ohio for babies born with outwardly expressive genitalia. But that peen never did sit right with her and, since 2008, she has been a woman in mind, body, and soul.”

Brents was not told that Fox was trans before she was in the ring with him, the Post Millennial reported.

“I’ve fought a lot of women and have never felt the strength that I felt in a fight as I did that night,” Brents said, recounting her experience fighting Fox. “I can’t answer whether it’s because she was born a man or not because I’m not a doctor. I can only say, I’ve never felt so overpowered ever in my life and I am an abnormally strong female in my own right… I still disagree with Fox fighting. Any other job or career I say have a go at it, but when it comes to a combat sport I think it just isn’t fair.”

The Post Millennial report notes that the International Olympic Committee said that it would take treatment for one year prior to competition to level the playing field between transgender men competing against females and females would need “years of hormones” to gain some male advantages.

“There are no cohesive federal laws in the U.S. to determine what makes a male eligible to compete against women, and while males have won women’s championships, female-bodied athletes have not risen to the upper levels of male competition,” the website reported.

Fox told Outsports: “My teammates had no idea I was trans. They recognized my endurance, my strength, my ability to cut weight in the same category as cisgender women. There was no idea in their minds that I didn’t belong. They weren’t thinking, ‘oh my God, she’s going to kill somebody.’”