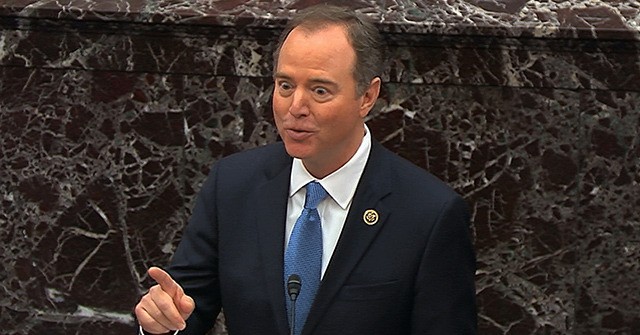 House Intelligence Chairman Adam Schiff (D-CA) kicked off the third day of impeachment hearings on Thursday, trying to create a moment of levity by floating the possibility of lawmakers being put in prison.

“I also want again take this opportunity to thank the senators for their long and considerable attention over the course of the last two days,” he began.

Schiff acknowledged that it was a “rare and extraordinary” opportunity for House members to address Senators on the Senate floor without speaking themselves.

“Of course it doesn’t hurt that the morning starts out every day with a Sergeant at Arms warning you that if you don’t, you will be in prison,” he added.

The Senate sergeant-at-arms begins each day of the trial warning Senators that they face “pain of imprisonment” if they disrupt the hearing.

“It is our hope that when the trial concludes and you’ve heard us and the president’s counsel over a series of long days, that you don’t choose imprisonment instead of anything further,” Schiff continued.

Schiff’s joke drew some mild chuckles from the Senate gallery, but it did not amuse Republican members of Congress.

“Adam Schiff starting off today with a joke about imprisoning Senators came off like a joke written by Jerry Seinfeld but delivered by George Costanza,” Rep. Mark Meadow commented on Twitter.

Adam Schiff kicks off Day 3 of the Senate impeachment trial threatening Senators with imprisonment. Not sure what he’s worse at: reading his audience or telling jokes. Either way he is not helping his cause. pic.twitter.com/vLEixsoVTt