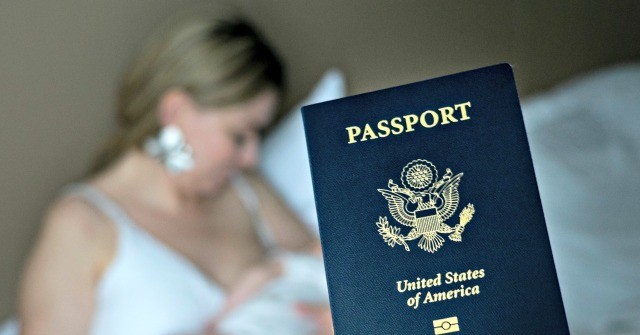 President Trump is the first president in United States history to take action on the issue of “birth tourism,” where visiting pregnant foreign nationals travel to the country to secure their children birthright American citizenship, expert Jessica Vaughan says.

On Thursday, the Trump administration issued a new rule where consular officers will be required to make sure that foreign nationals seeking B-1 and B-2 visas are not coming to the U.S. for the sole purpose of giving birth to a child to secure them birthright citizenship.

In an exclusive interview with SiriusXM Patriot’s Breitbart News Tonight, Vaughan said Trump is the first president in U.S. history to tackle the issue of birth tourism which she called “a racket.”

“[Birth tourism is] not something that we just need to put up with,” Vaughan said. “The Trump administration is the first ever to take action on this.”

“This [new rule] should be very helpful,” Vaughan said. “It’s not the only answer, I think there’s more they can do … but it will help.”

Also, Vaughan said the rule will allow State Department officials to revoke visas from foreign nationals who have lied about their intentions of coming to the U.S. on B visas. Officials could also ban those foreign nationals from the U.S.

Vaughan said, “[The rule] will also make it easier for people to be denied visas if birth tourism is suspected. Or if they do have a child here, and it can be shown that they lied about their reason for coming [to the U.S.], their visa might be revoked and they might be permanently barred from the United States.”

Trump to Halt ‘Birth Tourism’ into U.S. with Rule for Foreign Visitorshttps://t.co/xHmA6pYhm5

As Vaughan noted, foreign nationals on B visas arrive in the U.S. from all over the world every year, including from Turkey, Nigeria, Lebanon, and South Korea. The majority of beneficiaries of birth tourism, though, come from China and Russia.

“Different parts of the country kind of specialize in different types of situations, like a lot of the Russians will go to Florida, especially the Miami area and there are special apartments that they set up … in California it’s a huge racket with the Chinese,” she said.

“Some consular officers from Korea used to tell me that every single flight attendant for Korean airlines would go have their babies in the United States as what they considered as an insurance policy,” Vaughan continued.

While Trump has taken action on birth tourism, including a massive ongoing investigation by the Justice Department into the industry, Vaughan said an executive order ending birthright citizenship for the U.S.-born children of all non-citizens except lawful permanent residents would drive a legal challenge through the courts that could result in a Supreme Court decision.

“[Birthright citizenship] has been a barstool discussion for decades now, arguing about do we or do we not need a constitutional amendment … but I believe the president should kind of provoke a lawsuit,” Vaughan said. “Take some action, and at least we can have that case that makes it up to the Supreme Court so this can be definitively decided … so we can settle this issue once and for all.”

To date, the U.S. Supreme Court has never explicitly ruled that the U.S.-born children of illegal aliens must be granted automatic American citizenship, and a number of legal scholars dispute the idea.

Many leading conservative scholars argue the Citizenship Clause of the 14th Amendment does not provide mandatory birthright citizenship to the U.S.-born children of illegal aliens or noncitizens, as these children are not subject to U.S. jurisdiction as that language was understood when the 14th Amendment was ratified.

Today, there are at least 4.5 million anchor babies in the U.S. under 18, exceeding the annual roughly four million American babies born every year and costing American taxpayers about $2.4 billion every year to subsidize hospital costs.