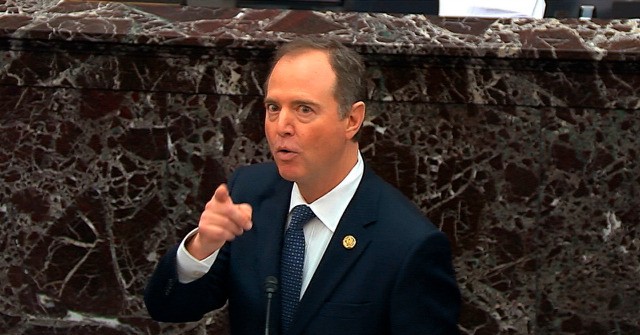 Democrats will have about 16 hours over the next two days to finish their opening arguments in President Donald Trump’s impeachment trial in the Senate.

Rep. Adam Schiff (D-CA) signaled that House Managers will focus on “abuse of power” on Thursday.

1:36 PM: Nadler uses Dershowitz’s 1998 comments on “abuse of power” against him. He also uses AG Barr’s 2018 remarks on abuse of power against Trump as well.

The Democrats don’t want a Witness Trade because Shifty Schiff, the Biden’s, the fake Whistleblower(& his lawyer), the second Whistleblower (who vanished after I released the Transcripts), the so-called “informer”, & many other Democrat disasters, would be a BIG problem for them!

1:18 PM: Nadler is now explaining the “ABCs” (abuse, betrayal, corruption) of impeachment to the Senators.

1:11 PM: Nadler says no president has ever abused his power like Trump in the country’s history. He says Trump puts Nixon to shame with his “unprecedented” stonewalling. He says Trump’s conduct is “not America first. It’s Donald Trump first.” He says Trump has “flagrantly violated his oath.”

1:06 PM: Schiff again leads off. Says it is rare for Senators to sit silently and pay attention to what House Members are saying. Says it helps that they will be imprisoned if they don’t do so. After saying he hopes witnesses will be able to testify, Schiff yields to Nadler.

1:05 PM: After Senators recite the Pledge of Allegiance, the second day of opening arguments is under way. Democrats have a little more than 16 HOURS left to make their case against Trump to the Senators.

Executive privilege cannot be used to prevent a witness who is willing to testify from appearing, and certainly not one who no longer works in government. It’s not a gag order. And witnesses testify on national security all the time.

Bolton has a right to testify if he wants to. https://t.co/4FtvPDgtDl

For those reading Murkowski tea leaves, just asked her about witnesses and exec privilege: “The House made a decision that they didn’t want to slow things down by having to go through the courts. And yet now they’re basically saying you guys gotta go through the courts…” 1/2

12:45 PM: Chief Justice John Roberts has arrived in the Senate. Opening arguments scheduled to continue at the top of the hour.

Schumer says’s yesterday’s opening arguments from House managers in the #ImpeachmentTrial may have been the first time that many GOP senators heard the evidence not through the lens of Fox news.