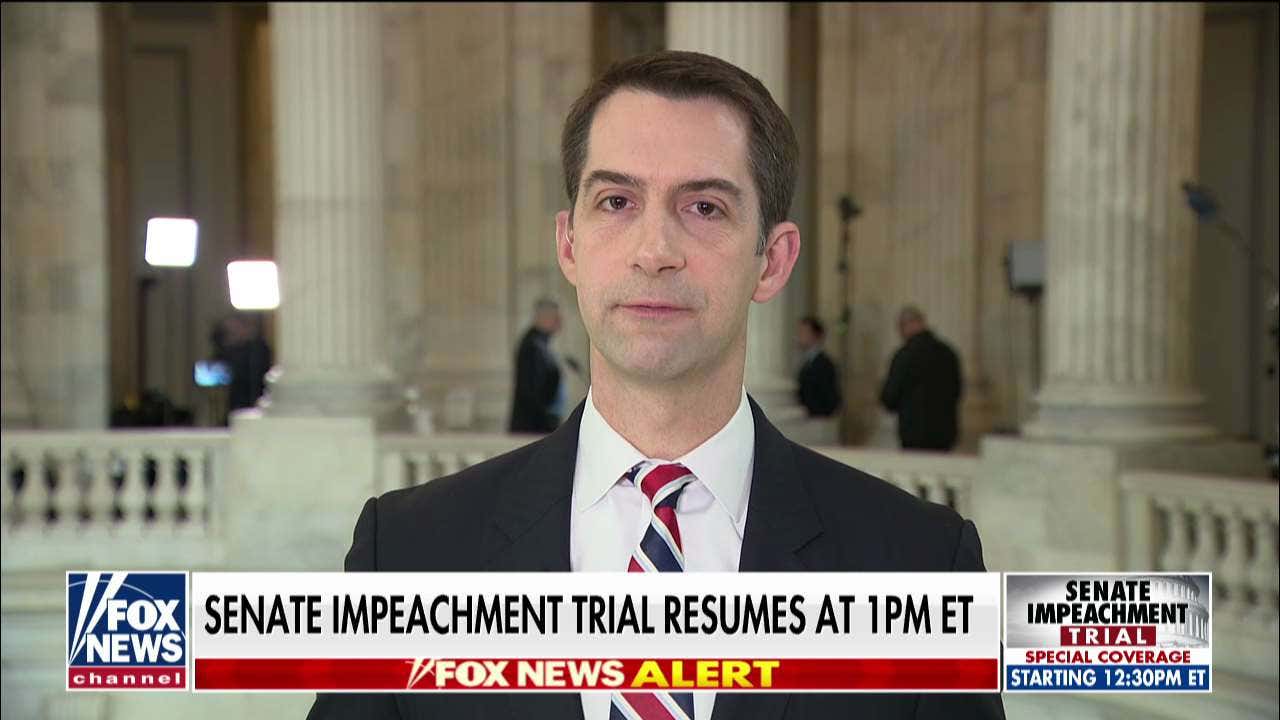 Sen. Tom Cotton, who was required to sit through the entirety of Wednesday’s marathon Senate impeachment trial session, said on Thursday that “it certainly seems to drag on late into the night as House Democrats repeat themselves time and time again.”

Cotton, R-Ark., made the comment on “America’s Newsroom” on Thursday, adding that if House Democrats “had strong evidence though, I think they’d simply present that evidence and let it speak for itself, but they don’t.”

“That’s why what we heard yesterday were repetitive arguments over and over again based on little more than hearsay, and the House Democrats’ objections to Donald Trump being the president,” he continued.

Cotton, a member of the Senate Armed Services Committee, said he expects Thursday’s proceedings will be similar to the day before.

On Wednesday, California Rep. Adam Schiff kicked off the House Democrats’ three-day opening case against President Trump by accusing him of trying to “cheat” in the 2020 election through his Ukraine dealings, following a raucous first day of impeachment trial speeches in the Senate that lasted into the middle of the night.

INSIDE THE CHAMBER, RESTLESS LAWMAKERS STRUGGLE TO PAY ATTENTION AS SENATE TRIAL DRAGS ON

“It’s right a lot of senators are really digging into this deeply for the first time because we’ve been doing our own work over here in the Senate for the last four months, work that the American people want us to do, like better trade deals or rebuilding our military,” Cotton said on Thursday.

“One thing I’ve seen as I’ve listened to these House Democrats for the last few days is just how flimsy the evidence is to support their case, based primarily on hearsay. And again, repeating themselves over and over again, because they don’t have the evidence that would just speak for itself.”

He added that he thinks his Republican colleagues are also surprised at how “flimsy” the impeachment case is.

Cotton noted that House Democrats “keep saying they have an overwhelming case.”

“If they had an overwhelming case, they wouldn’t be demanding that the Senate do the work that the House wasn’t willing to do, subpoenaing documents and witnesses and going to court if necessary to enforce that,” he said. “The Democrats refused to do that in the House because they wanted to rush this through to try to hurt the president’s reelection chances.”

The impeachment inquiry is focused on Trump’s effort to press Ukrainian President Volodymyr Zelensky during a July 25 phone call to launch politically related investigations regarding former vice president Joe Biden and his son Hunter’s dealings in Ukraine, as well as issues related to the 2016 presidential election.

Regarding witnesses being allowed to testify during the trial, Senate Minority Leader Chuck Schumer, D-N.Y., said a potential swap was “off the table.”

“First of all, the Republicans have the right to bring in any witness they want. They haven’t wanted to and that trade is not on the table,” Schumer said.

“Right now I simply don’t see a need for any witnesses in part because the House Democrats don’t really have a good explanation for why they didn’t pursue these witnesses and documents months ago,” he continued. “The only real explanation is they wanted to rush this through, be done before Christmas and try to hurt the president’s reelection chances.”

He added that “if we get to the point where we call witnesses, I certainly don’t think that we should only have Democratic witnesses and if the White House lawyers want to call Hunter Biden to understand exactly what he was paid $80,000 a month to do, then I think that would be entirely appropriate.”