Chinese hospitals in Wuhan are being forced to turn away possible coronavirus patients due to overcrowding and a critical shortage of supplies. Companies that manufacture supplies are also having difficulties getting employees to come to work.

“There were a lot of Wuhan businessman Xiang Dongk told the Wall Street Journal. “The situation is really bad. Really concerning.”

Chinese authorities locked down Wuhan, the epicenter of the novel coronavirus outbreak, and neighboring communities. Hospitals in the area are being forced to turn away patients due to a shortage of beds and medical supplies, the newspaper reported.

Hospitals are taking to social media and pleading for donations of supplies.

The government announced it is deploying a team of 40 military doctors to supplement the capacity for care at Wuhan-area hospitals. They are also shipping protective clothing and gloves to the region.

Authorities are rushing to complete and open a new hospital. Officials expect the hospital to open within six days. 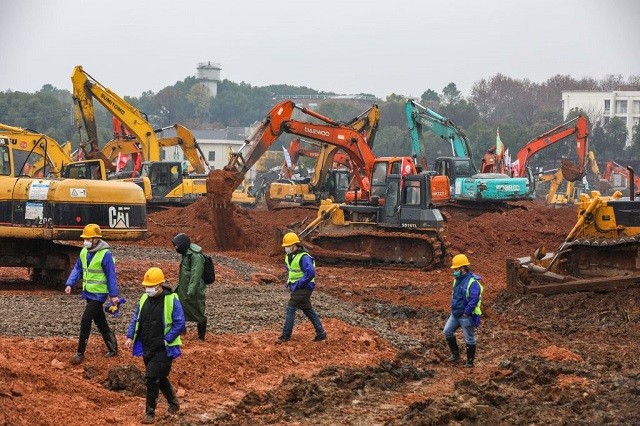 Employees work at a construction site of a hospital to treat patients during a virus outbreak in Wuhan in China’s central Hubei province on January 24, 2020. – China is rushing to build a new hospital in a staggering 10 days to treat patients at the epicenter of a deadly virus outbreak that has stricken hundreds of people, state media reported on January 24.  (Photo by STR/AFP via Getty Images)

One business owner whose company makes protective masks is having difficulty getting employees to report to work despite offers of quadrupled pay.

“We already quadrupled the salary to get our workers back to work five days in advance during the spring festival. But workers still do not want to come back,” Cao Jun, general manager of Lanhine Corp., which owns a face-mask factory in eastern China’s Zhejiang province told the WSJ. So far, he has only enticed between 10 and 20 percent of his workforce to come in.

“Based on our industrial estimates, the shortage of medical protective equipment will continue until the end of the epidemic,” he predicted.

Officials report 26 deaths and 882 confirmed cases of the Wuhan novel coronavirus in China as of Friday, according to the South China Morning Post (SCMP).

Construction workers are being paid triple their normal wages to quickly build a makeshift quarantine hospital that will house approximately 1,000 patients, the SCMP reported. With other hospitals already facing shortages of supplies and beds, it is not clear how this new hospital will be supplied.