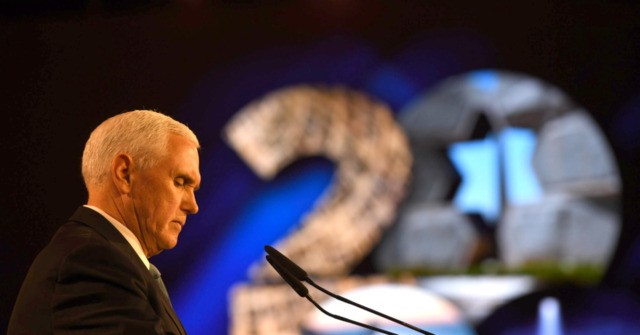 Vice President Mike Pence joined the Christian Broadcasting Network Thursday in Jerusalem where he discussed the rise of anti-Semitism and the partisan impeachment trial against President Donald Trump.

There is a rising tide of vile antisemitism that’s emerging all around the world. We’ve seen it — we’ve seen it result in violence at synagogues in Pittsburgh and in Los Angeles, and the loss of life.”

While he did not specify whom he was talking about, Pence also made reference to comments made by several members of Congress:

We’ve also seen it manifested in the rhetoric — not only the BDS movement, attempting to get people to divest from Israel — thinly veiled antisemitism; but even in the halls of Congress, we’ve heard antisemitic rhetoric that has not been roundly and universally condemned as it should be.

The good news is, and you saw it here at the 75th anniversary of Auschwitz: The world is mobilizing. The American people are aware of it. You look at the recent elections in the United Kingdom, and it was understood to be — the Liberal Party’s tolerance of latent antisemitism was seen as one of the reasons why they lost in a landslide in recent elections.

He added, “The truth is that a rejection of antisemitic rhetoric or worse should be universal in our society, in our public debate.  And we’ll continue to demand that.”

As for the “partisan impeachment,” Pence claims the Democrats have a “weak case.” He said:

Pence also made it clear that the Democrats must look at the facts:

When they look at those facts, this President will be acquitted, and, frankly, we’ll put this chapter, this partisan impeachment, in the rearview mirror; and maybe, just maybe, get the Democrats in Congress to begin to focus on the things that President Trump and I have always focused on every day of this administration: making America more secure, making our borders more secure, making our economy more prosperous, and seeing conservatives appointed to our courts at every level — focusing on the things that matter most to the American people.

“I think the American people see this for what it is,” he added. “This is a partisan impeachment that really has just been the latest chapter of a three-year effort to overturn the results of the 2016 election.”

“For two and half years, it was Russia collusion, until the Mueller report found no collusion, no obstruction. Case closed,” Pence concluded. “And then it seemed like there was only a brief intermission, and, all a sudden, we’re off on a partisan impeachment over a phone call the President made with a world leader — a phone call that the American people can read.”