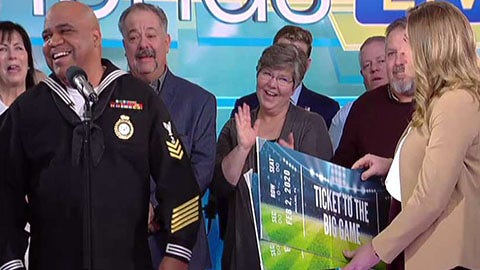 A Navy veteran whose national anthem performance blew away NFL fans at the AFC Championship Game was surprised with Super Bowl tickets Friday on “Fox & Friends.”

The San Francisco 49ers will meet the Kansas City Chiefs at Hard Rock Stadium in Miami Gardens, Fla., on Feb. 2 for a chance to claim the title of NFL champions.

“I was supposed to have a Super Bowl party at my house. Find another place to go,” Wilson joked to the live audience.

Wilson brought down the house with his rendition of “The Star-Spangled Banner” on Sunday before the Kansas City Chiefs and Tennessee Titans played for the AFC Championship.

Wilson’s national anthem before kickoff stunned NFL fans on social media, with some even saying he should be brought back for the title game in Miami.

Wilson said that performing the “Star-Spangled Banner” at the AFC championship game of his favorite team, the Kansas City Chiefs, was an “amazing” opportunity.

Wilson, also a gospel artist, revealed on Instagram that he didn’t eat before singing the National Anthem.

“To have that whole crowd for that 1 minute and 30 seconds to just put away their differences and sing one song altogether — that was amazing to me,” Wilson said.

The AFC Championship game wasn’t Wilson’s first rodeo. He has delighted sports fans across several stadiums with his talented voice.