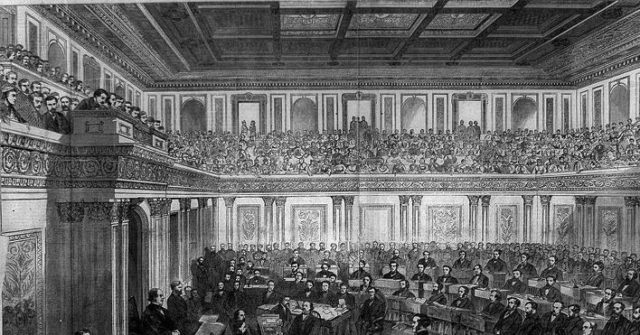 Neither of the impeachment charges against President Donald Trump is indictable. As such, neither is impeachable. The Constitution compels the Senate tp acquit President Trump as a matter of law.

First, the plain text of the Constitution requires it; second, the protection of the people’s right to select the president cannot make the president serve at the pleasure of Congress; and third, the due process rights of the president prevent nebulous, vague undefined “offenses” being the basis of punitive impeachment.

This understanding of the Constitution is not new.

As Alan Dershowitz recently noted, past former Supreme Court Justices made the same argument on the Senate floor in past impeachments.

As you can read in the journals of past infamous impeachment trials, Founding Fathers, respected jurists, and legal scholars each argued near the very founding of our country: “[n}othing is impeachable that is not also indictable.” (Source: Hinds’ Precedents, Volume 3, Chapter 72, “The Impeachment and Trial of Samuel Chase,” published by the U.S. Government Publishing Office, found at this site: https://www.govinfo.gov/content/pkg/GPO-HPREC-HINDS-V3/html/GPO-HPREC-HINDS-V3-21.htm)

Harvard law professor Nikolas Bowie has recognized the significance of this precedent, in his response to Laurence Tribe in Harvard Law Review. (https://harvardlawreview.org/wp-content/uploads/2018/12/vol132_Bowie.pdf).

Indeed, every judge or justice to take the floor of the Senate and argue about impeachment — for president or judges — has agreed since 1805: impeachment requires a crime.

The counsel for Justice Chase included Judge Joseph Hopkinson, himself the astute and learned son of the famous signer of the Declaration of Independence, Francis Hopkinson.

Another fellow member of the Constitutional Convention also joined the defense of Justice Chase: Luther Martin, rightly identified as one of the “Founding Fathers” himself.  Martin, Chase and Hopkinson all concurred that it would be shocking if any official could be “impeached and deprived of his office when he has done nothing which the laws of his country prohibited.”

Yet that is precisely what has occurred to President Trump.

A near half-century later, former Chief  Justice Curtis successfully argued the same on behalf of the first president ever impeached, Andrew Johnson: “when the Constitution speaks of treason, bribery and other high crimes and misdemeanors it refers to, and includes only, high criminal offenses against the United States, made so by some law of the United States existing when the acts complained of were done.”

Why else would impeachment be referenced in the power to pardon, if not based on criminally offensive conduct? Were it otherwise, we could have impeachment “by no crime” and a trial “by no court,” subjecting the people’s elected president to the capricious whim of Congress on the vaguest of charges, a parliamentary form of power the Constitution directly discarded. Our forebears considered it a “wild idea” that impeachment could occur where the impeached “has violated no law of the country.”

Since 1805, jurists and counselors recognized how the entire constitutional structure requires limiting impeachments to indictable offenses. References to the pardon power, to conviction, to subsequent post-impeachment criminal prosecutorial power – all reveal the Constitution’s intent to limit impeachment to a peculiar form of criminal conduct.

Each state constitution mirrored this principle as well, as “impeachment has been considered by all of them as a criminal prosecution for the punishment of defined offenses against the laws.”

The President Serves at the Will of the People, Not Congress

As James Madison himself objected at the time of the crafting of the Constitution, allowing impeachment for “vague” terms like “maladministration” (which was adopted precisely to target so-called “abuses of power”), would be making the President serving at the “pleasure of the Senate.” (Report of the Committee of Eleven, published by Yale Law School, https://avalon.law.yale.edu/18th_century/debates_908.asp).

The argument was revisited in both the Chase trial in 1805 and the Johnson trial in 1868: loosening the definition of impeachment to cover conduct not criminalized by existing law inescapably endangered the separation of powers.

Due process requires limiting impeachments to indictable offenses. Were it otherwise, the House could merely “create the offense, and make any act criminal and impeachable at their will and pleasure,” offending the Constitution’s ex post facto and bill of attainder limits on congressional power.

Just as a grand jury has no “general power to make anything indictable which they might disapprove,” so it is that the House has no general power to make anything impeachable which they might disapprove. How can the House be allowed a power denied all government “to create crimes and inflict the most serious penalties on actions never before suspected to be criminal” merely through “exercise of their power of impeachment”?

Judge Joseph Hopkinson called that the “code of the Roman tyrant,” not the Constitution of the free United States of America. As Judge Hopkinson ably argued, an undetermined definition of impeachable offenses placed a sword over the unconscious head, and put quicksand where safe land appeared to be.

A president is not above the law, but he is not below the law either.

The wise words of our predecessors can still be heard in the echoes of the Senate Chamber. Future Senator Robert Harper defined these limitations on impeachment as an “anchor of personal rights and political privileges” that protects all against “the storms of party rage, personal animosity and popular caprice.” Justice Curtis warned illicit impeachments would “return to plague its inventors.”

Acquittal as a matter of law should be the Senate answer to this House hoax.