Sweden experienced a significant rise in gang-related drug violence in 2019, according to a government report recently released.

The uptick in violence in recent years has cracked the social fabric of Sweden, a country that prides itself on social solidarity and historically low levels of crime.

According to the United Nations Human Development Index, which essentially rates how well a country is doing by taking into account economics, health, and education measurements, ranks Sweden eighth in the world. The 2019 Social Progress Index, which places its focus on non-economic elements of social performance, ranks Sweden fifth and scores 96 percent on the dimension of basic human needs.

According to Swedish police, the rise in explosions and violence is tied to an upsurge in rivalries among criminal gang elements connected to the drug trade. Alongside the rise in gang violence, crimes of vandalism also increased in 2019 and the number of reported rapes increased, with 8,350 reports in 2019. As the media has hyped the spree of violence, public outcry for tougher law and order policies has grown.

The blasts, on two separate locations and mere minutes apart, caused mayhem in the suburbs of otherwise tranquil Stockholm. Fifty people were evacuated from their homes following the explosions. No one was killed and local police have ruled out any links to terrorism thus far. 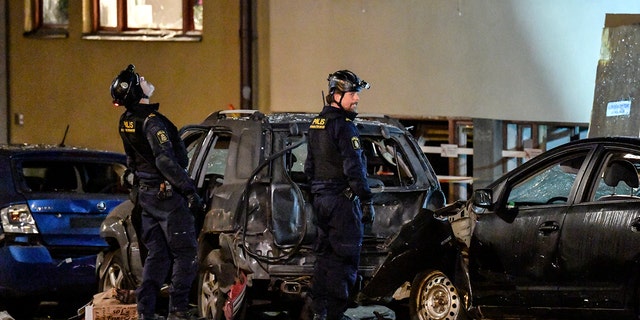 Police work at the scene of an explosion that caused damage to a residential building in central Stockholm, early Monday, Jan. 13, 2020. There were no reported injuries. (Anders Wiklund/TT News Agency via AP)

SWEDISH POLICE ARREST 3 IN BOMBINGS AMID INCREASE IN GANG VIOLENCE

Little is known about the suspects and convicted criminals responsible for the recent wave of violence, but they do share certain similarities, according to Swedish authorities. One of the defining features, according to the authorities, is that they come from poor socio-economic backgrounds and tend to be second- or third-generation immigrants. 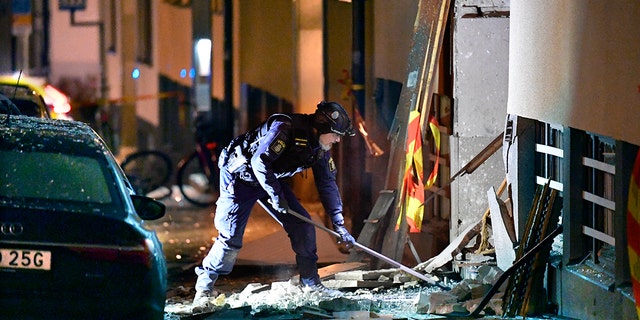 Police work at the scene of an explosion that caused damage to a residential building in central Stockholm, early Monday, Jan. 13, 2020. There were no reported injuries. (Anders Wiklund/TT News Agency via AP)

According to the Swedish National Council for Crime Prevention, there were 449 instances of murder, manslaughter, and assault resulting in death in 2018, up from 317 in 2014. There was also a jump in rape cases, from 6,697 in 2014 to 7,958 in 2018. Although the numbers are creeping up, Sweden still enjoys relatively low levels of crime compared with peer nations.

Swedish newspaper Expressen conducted a survey in 2017 based on police files of 192 individuals in Stockholm and 82 percent were members of criminal gangs or had links to criminal networks.

In 2017, 58 percent of those suspected for a crime on reasonable grounds were migrants and 73 percent suspected for murder and manslaughter were migrants, according to a study by Goran Adamson, professor of sociology at University West, Sweden.

Adamson is careful to point out the relation between migrants and crime is a delicate issue and should be treated with caution to avoid generalizations and simplifications. He notes that the vast majority of migrants are law-abiding people. However, the current circumstances put the country on the defensive and Swedish authorities are not equipped to deal with the growing threats, particularly to urban areas.

Rising crime levels in a country with very little societal divisions or discord has led Sweden down a similar ideological divide over immigration that swept across Europe and much of the western world following the immigration crisis, which intensified in 2015. Many experts and policymakers, however, stress that there is no direct correlation between the recent uptick in violence and the increase in asylum seekers entering Sweden. 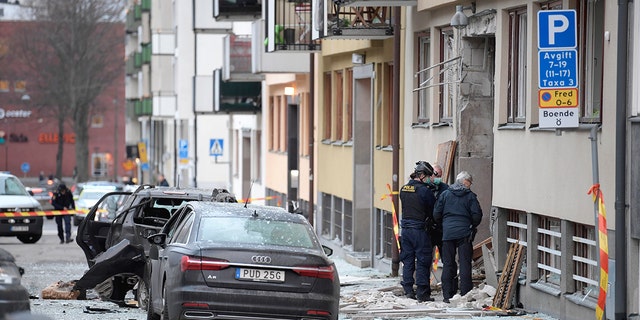 Police work at the scene of an explosion which caused damage to a residential building in central Stockholm, Monday, Jan. 13, 2020. There were no reported injuries. (Janerik Henriksson /TT News Agency via AP)

Syria’s civil war and the surrounding chaos in the Middle East and North Africa were the primary drivers of a mass wave of immigrants seeking refuge in Europe and Sweden was one of the most generous and compassionate nations to step up and fulfill their international obligations by welcoming thousands of refugees. In 2015, about 162,877 asylum seekers, mostly from Syria and Afghanistan, entered Sweden. Because of Sweden’s generous family reunification policies, some believe the number is much higher. As of 2018, Sweden’s foreign-born population stands at 18 percent of the country’s 10 million residents.

In response to the public backlash from Sweden’s traditionally magnanimous immigration policies, the country implemented tighter asylum laws. Even with the restrictive immigration laws in place, it was not enough to stem the tide of the nationalist and nativist forces that had swept across Europe. Progressive Sweden succumbed to European right-wing populist sentiment as the anti-immigrant Sweden Democrats, a party with historical ties to neo-Nazis, won 17 percent of the vote in 2018 national elections.

Sweden Democrats rise is due in no small part to the public’s perceived view that the government is incapable of addressing Sweden’s social ills. “When the elite then labels a party sapping into the sentiments and concerns of the people as “populist” or even racist, it is only speeding up its own demise,” Adamson warned.

Most recently, in a December 2019 poll, the Sweden Democrats saw their popularity shoot up to nearly 23 percent, posing a serious challenge to the ruling Social Democrats, the party which has governed Sweden for most of the 20th and 21st centuries.