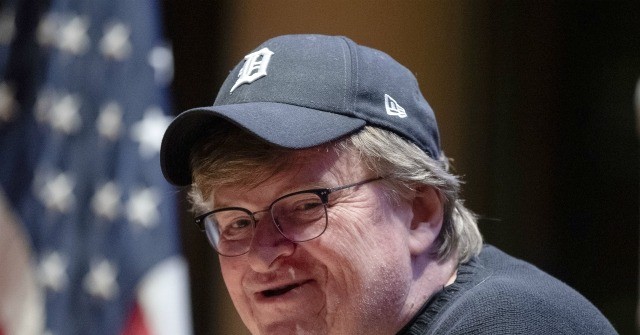 Left-wing documentary filmmaker Michael Moore stumped for Sen. Bernie Sanders’ (I-VT) in Iowa on Saturday, telling the crowd that the socialist senator’s proposals to eliminate student debt and address the climate change “crisis” come from a place of selflessness, unlike President Trump, who Moore claims “doesn’t even give a shit about his own kids or grandkids.”

“What you do is not just about Iowa, just like Bernie. What he has done his whole life is not just about Bernie,” the Fahrenheit 11/9 director declared, claiming that Sanders “gains nothing from eliminating student debt” and “gets nothing out of stopping this climate emergency.”

There’s “no greater moment, no more important moment to elect a person that will be relentless, relentless in making sure that this stops,” Moore said, referencing climate change and adding that we may get another 20-40 years.

“He knows he’s not gonna be here in 40 years, so why is he doing it? What’s he get out of it? What’s in it for him?” Moore asked, contending that President Trump “doesn’t even give a shit about his own kids or grandkids.”

“We have a president who we’ve seen, even the kids and the grandkids will be thrown under his bus,” he said. “So I mean that — that is the true narcissist when he doesn’t even give a shit about his own kids or grandkids. Wow, that takes some heavy-duty psychological maddening wackadoodle.”

Moore’s newfound decades-long deadline stands in contrast with the remarks he recently made during an appearance on Late Night with Seth Meyers Tuesday, proclaiming that “if we don’t fix climate change, like, now,” we are “done.”

Last month, Moore predicted that, if the election were held today, America would re-elect Trump.

“The problem is, is that he will — if the vote were today, I believe, he would win the electoral states that he would need, because, living out there, I will tell you, his level of support has not gone down one inch,” he said in an interview with Democracy Now!

“In fact, I’d say it’s even more rabid than it was before because they’re afraid now,” he continued, adding that the Democrat candidate would still win the popular vote by millions.