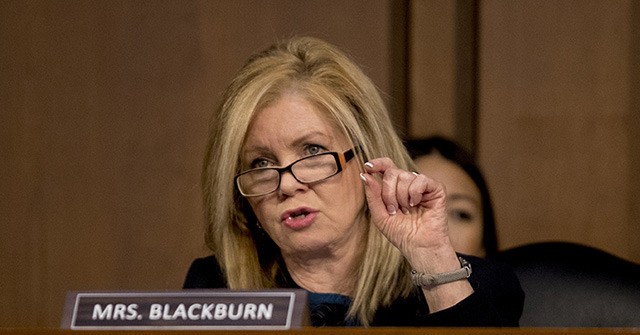 Sen. Marsha Blackburn (R-TN) has drawn fire from across the anti-Donald Trump political spectrum the past few days as she has publicly challenged the fake establishment built around key impeachment figure and Democrat witness Lt. Col. Alexander Vindman.

Vindman infamously testified in his full military uniform–despite the fact he does not wear it to work at the National Security Council (NSC)–before the House Permanent Select Committee on Intelligence (HPSCI) during the House Democrats’ impeachment inquiry stage last year helping build their case to pass articles of Impeachment before Christmas. The “impeachment managers,” the top Democrats that House Speaker Nancy Pelosi (D-CA) has appointed to argue the Democrats’ partisan case for removing President Trump from office before the U.S. Senate, have repeatedly invoked Vindman’s testimony over the course of this week, where Democrats have finally finished their opening arguments after three long days of that and a previous late night on Tuesday in the Senate where they used a series of meaningless amendments to buy more time to press their case on the Senate floor.

But it is a series of tweets from Blackburn that have infuriated the president’s enemies, Never Trumpers and Democrats alike, where the freshman U.S. senator and conservative firebrand from Tennessee–a strong ally of the president–has called for the truth to finally come out about Vindman and others’ role in orchestrating this entire impeachment charade from the beginning.

Everything Blackburn has said about Vindman is factually accurate.

On Thursday, Blackburn began a tweet thread–one of many she’s done this week exposing the left on this impeachment case–by questioning the image that the establishment media and Democrats have painted of Vindman being patriotic:

Adam Schiff is hailing Alexander Vindman as an American patriot.

How patriotic is it to badmouth and ridicule our great nation in front of Russia, America’s greatest enemy?

As she points out, Vindman was reprimanded earlier in his military career for badmouthing the United States in front of Russian military officials.

“Before he was detailed to the White House, Vindman served in the U.S. Army, where he once received a reprimand from a superior officer for badmouthing and ridiculing America in front of Russian soldiers his unit was training with during a joint 2012 exercise in Germany,” RealClearPolitics’ Paul Sperry wrote on January 22.

So, clearly, the facts behind Blackburn’s first tweet were factually accurate.

Then, a few minutes later, she added a follow-up tweet questioning whether–as HPSCI chairman and Pelosi-designated “impeachment manager” Rep. Adam Schiff (D-CA) claimed on the floor of the Senate this week that Vindman was not “vindictive”–Vindman’s decision to circumvent his chain of command to leak the contents of the president’s call with Ukraine’s president was “vindictive.”

Alexander Vindman broke the chain of command and leaked the contents of the President’s July 25th phone call to his pal, the “whistleblower.” Over a policy dispute with the President!

How is that not vindictive?

First and foremost, Vindman admitted openly during his testimony before HPSCI last year under questioning from ranking GOP member Rep. Devin Nunes (R-CA) that he leaked the contents of President Trump’s call with Ukrainian president Volodymyr Zelensky to two officials who were not in the White House. Vindman claimed during his testimony then that these two officials he leaked the call to were “cleared U.S. government officials with appropriate need to know.” While Vindman claimed under oath he did not know who the whistleblower was, Schiff intervened saying that answering Nunes’s questions identifying the individuals outside the White House to whom Vindman leaked the Trump-Zelensky call details may out the identity of the whistleblower who filed the original complaint.

The person who filed the complaint has been long been–and was at the time of this hearing–publicly reported to have been CIA official Eric Ciaramella. According to a follow-up report published this week by the outlet that first reported Ciaramella’s identity, RealClearPolitics, Vindman was the person who leaked the call details to Ciaramella.

“A mutual ally in the National Security Council who was one of the White House officials authorized to listen in on Trump’s July 25 conversation with Ukraine’s president leaked it to Ciaramella the next day — July 26 —  according to former NSC co-workers and congressional sources,” RealClearPolitics’ Sperry wrote. “The friend, Ukraine-born Lt. Col. Alexander Vindman, held Ciaramella’s old position at the NSC as director for Ukraine. Although Ciaramella had left the White House to return to the CIA in mid-2017, the two officials continued to collaborate through interagency meetings.”

In essence, what that means is that according to this investigation published by RealClearPolitics and Vindman’s actually testimony before HPSCI during the impeachment proceedings in the House of Representatives, Blackburn was correct when she tweeted that Vindman leaked the call details to the alleged whistleblower.

What’s more, Tim Morrison at the NSC–Vindman’s boss in the White House–testified during the impeachment hearings that the lieutenant colonel had an “unfortunate habit” of going around the chain of command like he did by leaking the call details to the two people he confirmed he leaked to during the HPSCI hearings.

So, again, this second tweet from Blackburn–while inconvenient for the left’s anti-Trump narrative–is also factually accurate.

Then Blackburn followed up later with a third tweet noting that Vindman’s now former superior officer, now retired, has publicly admonished him for being overtly political:

Vindman’s commanding officer, Army Lt. Col. Jim Hickman: “Do not let the uniform fool you. He is a political activist in uniform.”

This tweet from Blackburn is also factually accurate. In fact, Lt. Col. Jim Brickman, now retired, has publicly tweeted about Vindman’s overt political activism in uniform:

…not your professional, field-grade officer, who has the character & integrity to do the right thing. Do not let the uniform fool you…he is a political activist in uniform. I pray our nation will drop this hate, vitriol & division, & unite as our founding fathers intended!🇺🇸

What’s more, Hickman has also confirmed that Vindman was reprimanded for badmouthing the United States to Russian soldiers:

…Russian Soldiers, as well as the young Officers & GS Employees about America, Russia, & Obama. He was apologetic of American culture, laughed about Americans not being educated or worldly, & really talked up Obama & globalism to the point of uncomfortable. He would speak…

Hickman’s boss, Thomas Lasch, corroborated the story of Vindman disparaging the United States to Russians and him being reprimanded for it:

Jim, I remember exercise ATLAS VISION and this incident. I was your Boss at the time and was satisfied when you told me that you “took care of it” (meaning then MAJ Vindman’s disparaging comments about the U.S. to the Russians ) and I just put things together this past week.

So, again, Blackburn’s third tweet on Vindman was also factually accurate. Then, she went on Fox News with Laura Ingraham to double down on all the serious questions about Vindman:

The American people deserve the truth on the “whistleblower,” Vindman and how this impeachment got started. pic.twitter.com/halfuwJYbV

President Trump retweeted Blackburn’s last two tweets, the one quoting Brickman and the one of her Ingraham interview.

Blackburn’s comments, and President Trump amplifying them, have sent Trump critics who have banked their credibility in this impeachment saga in large part on Vindman’s account into a frenzy.

These are just a small sampling of all the Never Trumpers, deep state sympathizers, and top Democrats who attacked Blackburn for these tweets:

HELLLLLLLLLLLOOOOOOOO @MarshaBlackburn seems you have been peddling BS from talking points from folks who don’t do fact-checking worth a damn. See below 👇I am sure you wish to be accurate in your disparagement of a man who serves our nation with distinction https://t.co/Hqku1mMOmd

Will @MarshaBlackburn challenge the patriotism of Brigadier General Zwack as well? Does she believe his testimony or is she sticking with QAnon and Gateway Pundit? https://t.co/agFLNhjfUj

WATCH: “Okay, Sen. Blackburn, I think you meant to criticize Donald Trump in that tweet,” fmr. Sen. McCaskill says, excoriating Blackburn for her criticism of Lt. Col. Vindman. “Don’t you lecture anybody about how patriotic a veteran like Vindman is.”https://t.co/00syLmd0pC

Alexander Vindman is a career Army infantry officer who received the Purple Heart after being wounded from an IED in Iraq in 2004. Both his brothers are Army officers, too. They emigrated here from the former USSR because their father loved America.

Marsha Blackburn is a coward. https://t.co/Ims7wZuIVw

“For her to attack him is really quite shameful,” says Duckworth. pic.twitter.com/x2HDypBvt0

While this outrage purports to be genuine, a senior Senate GOP aide told Breitbart News that the real reason why these Trump critics are bashing Blackburn is because she’s over the target and zoned in on a major problem in the Democrats’ case for impeachment with all of Vindman’s weaknesses and problems.

“Blackburn has zeroed in on a major vulnerability because Vindman admitted to leaking the President’s call – despite media claims to the contrary,” the senate GOP aide said. “He had an agenda and a problem with authority. The Ukraine call was nothing more than a policy dispute dressed up by disgruntled deep staters in an effort to remove the president. Once the Mueller report failed, the left moved on to plan B. It’s that simple. The media will do anything to protect the narrative.”