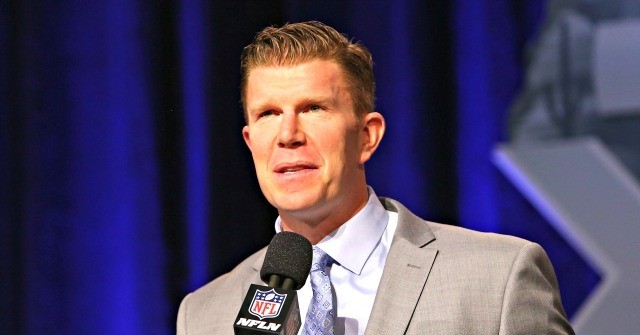 Former NFL star and Super Bowl champion Matt Birk told pro-life activists Saturday that, as an adoptive father of two, he has tremendous “gratitude” to the birth mothers of his children who performed the “greatest act of love.”

Birk headlined the first-ever National Pro-Life Summit Saturday in Washington, DC., an event that focused on a “post-Roe” society in America in which pro-life activists reach out to assist women in unplanned pregnancies or who are victims of rape. The movement aims to develop a network of pregnancy support to those women so that they do not consider abortion as the only way of coping.

Speaking to a sold-out crowd of over 3,000 mostly young people, Birk, a Catholic, told his listeners that two of his children are adopted.

“I cannot tell you the level of gratitude I have to their birth mothers for doing what I think in my life is the greatest act of love that I have ever witnessed,” he said. “To place their child up for adoption.”

The NFL star recalled in 2013 – the year his team, the Baltimore Ravens, won the Super Bowl, was also the year former President Barack Obama became the first U.S. president to attend a Planned Parenthood gala.

“He said, ‘God bless Planned Parenthood,’” Birk noted, adding that when the Ravens were invited to the White House after their Super Bowl win, he attempted to “quietly” refuse the invitation because he is pro-life.

“I wasn’t ready for what happened next,” he told the sold-out crowd. “All of a sudden I got introduced to the 24-hour news cycle.”

Birk said he suddenly began responding more to questions about why he would reject an invitation from Obama, rather than why he was pro-life.

The football star urged his young audience to be able to articulate why they are pro-life. He explained:

Everybody’s born pro-life, and I don’t mean that because you’re born, but everybody starts out pro-life. When you’re eight years old, everybody’s pro-life. Abortion does not make sense to an eight-year-old – you can’t reason it.

Birk continued that as reason and logic develop, “some people get it twisted.”

“I’m pro-life because God is the originator of all life,” explained Birk. “I am a child of God and was made in his image.”

He said pro-lifers have been challenging the abortion lobby’s claims for 47 years since the Supreme Court’s decision in Roe v. Wade:

Then, of course, they like to say, “It’s legal,” and, somehow, if it’s legal, it makes it morally right. But, we know in this country, we’ve had slavery and women used to not be able to vote.

Then, they started to use certain subsets, like Down syndrome … This makes no sense to me. If anybody’s ever been to the Special Olympics … they should call it the Joy Olympics. These are people who are incapable of hate or resentment – all they do is emanate joy! And, somehow … some people are reasoning that we should eliminate those people from society? Don’t we need more joy in our world?

And abortion is not going to heal a rape victim. It will only make things worse.

Birk said regardless of how the abortion lobby frames abortion, it can never turn it into a positive experience for women or babies:

Let me tell you something: You’ll never see a woman walking out of an abortion clinic with a smile on her face. There’s nothing to celebrate.

And you’ll never hear somebody say, “This is my daughter, she’s two years old, but I wish that I had an abortion.” You’ll never hear anybody say that, which only means one thing: that abortion must be evil. That’s why.

The NFL star called upon young people to continue to show up at the March for Life and training events like the National Pro-Life Summit.

“Show up on a national level and on a local level as well,” he urged.

“We are a movement that is pro-life, pro-woman, pro-God, pro-truth,” Birk added. “And you don’t have to defend the truth. The truth is like a lion. You just have to let it out of its cage!”

Held the day after the March for Life on the National Mall, the National Pro-Life Summit is a one-day training event for pro-life grassroots activists. Sponsored by Students for Life of America (SFLA), Live Action, Alliance Defending Freedom, and the Heritage Foundation, the event especially aims to educate and train high school and college students in advocating for the pro-life cause.

“On Saturday at the National Pro-Life Summit, we will train more than five times that number, and the event was sold out,” she said.