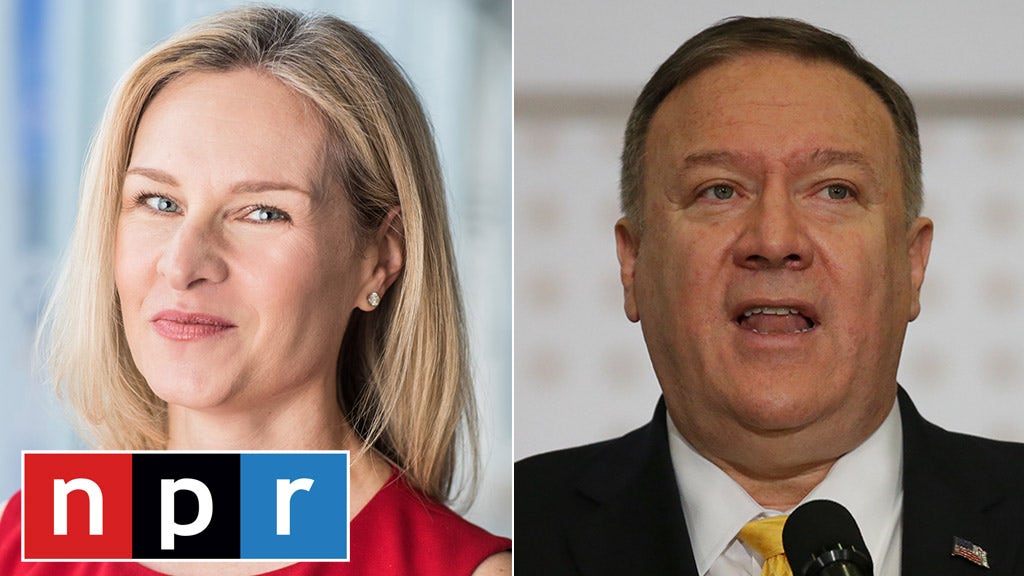 Secretary of State Mike Pompeo responded Saturday following media reports that said he scolded an NPR reporter after they sat for an interview — one that Pompeo claimed afterward had strayed from an agreement he had reached with the journalist.

In the statement, Pompeo claimed Mary Louise Kelly lied to him, called her behavior “shameful” and insinuated she mistook a country in South Asia for Ukraine on a map.

“NPR reporter Mary Louise Kelly lied to me, twice,” Pompeo said in the statement. “First, last month, in setting up our interview and, then again yesterday, in agreeing to have our post-interview conversation off the record. It is shameful that this reporter chose to violate the basic rules of journalism and decency.”

NPR REPORTER SAYS POMPEO SHOUTED, CURSED AT HER AFTER SHE PRESSED HIM ON UKRAINE DURING INTERVIEW

He called the confrontation another example of how an “unhinged” media wants to hurt the Trump administration.

“It is no wonder that the American people distrust many in the media when they so consistently demonstrate their agenda and their absence of integrity.”

“It is no wonder that the American people distrust many in the media when they so consistently demonstrate their agenda and their absence of integrity.”

Jason Rezaian of The Washington Post, for example, called Pompeo’s statement “a shameful assault on #PressFreedom.”

That comment drew a sharp rebuke from Andrew Surabian, a former special assistant to President Trump.

“In what universe is complaining about a reporter breaking an off the record agreement an ‘assault on press freedom’?” Surabian wrote.

“If @NPRKelly did indeed break an off the record agreement, she should be fired & her colleagues should be condemning her, not holding her up as a resistance hero.”

“If @NPRKelly did indeed break an off the record agreement, she should be fired & her colleagues should be condemning her, not holding her up as a resistance hero.”

Pompeo concluded his statement by writing, “It is worth noting that Bangladesh is NOT Ukraine.”

The remark was an apparent reference to an interaction between Pompeo and Kelly in Pompeo’s office after the recorded interview ended.

“He shouted at me for about the same amount of time as the interview itself had lasted,” Kelly claimed on her show “All Things Considered” later Friday. “He was not happy to have been questioned about Ukraine. He asked, ‘Do you think Americans care about Ukraine?’ He used the F-word in that sentence and many others.”

Kelly said Pompeo asked her if she could find Ukraine on a map and when she said she could he had an aide pull out a blank map of the world and directed her to identify the country.

“I pointed to Ukraine,” she said. “He put the map away. He said, ‘People will hear about this.’”

Pompeo said he agreed to discuss only Iran in the recorded interview, not Ukraine. But Kelly pressed him on Ukraine, including questions on the ouster of former U.S. Ambassador Marie Yavonovitch.

Kelly told him she had confirmed with his staff the evening before that they would talk about both countries, which he disputed. And while Pompeo’s statement said Kelly promised the discussion in his office would be off the record, NPR reported Kelly was never told that.

“Nor would I have agreed,” she said.

NPR said it stands behind its report. “We will not be intimidated,” NPR CEO John Lansing said Saturday.

In December 2018, NPR was forced to issue a lengthy correction after falsely accusing Donald Trump Jr. of lying to the Senate about plans to build a Trump Tower in Moscow, claiming his statements contradicted Michael Cohen’s plea deal with Special Counsel Robert Mueller.

“At a time when journalists around the world are being jailed for their reporting — and as in the case of Jamal Khashoggi, killed — your insulting and contemptuous comments are beneath the office of the Secretary of State,” it read.

Kelly has traveled extensively as a journalist — most recently to Iran — and has a master’s degree from Cambridge in European Studies.