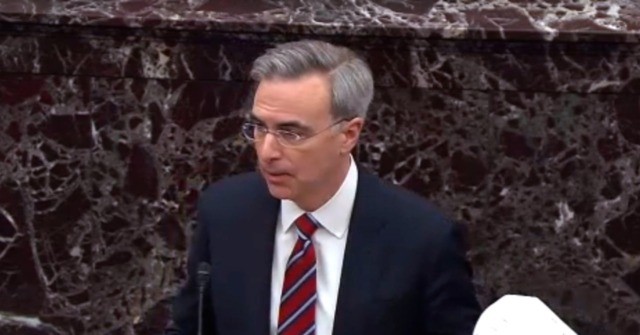 President Donald Trump’s legal team will finish their opening arguments on Tuesday in the president’s impeachment trial in the Senate.

1:36 PM: Sekulow says all of the legal scholars from a variety of backgrounds have a common theme–“danger.”

1:35 PM: Phibin yields back to Sekulow after addressing the House Democrats’ allegations of a “cover up.” He establishes hat all witnesses testified that there was no “malicious intent.”

1:10 PM: Philbin begins by noting Madison’s deep concerns with “vague terms” like “maladministration” would be an opportunity for the expansion of “arbitrary power.” He notes the framers rejected “maladministration” because it was too vague and “dangerous,” and they defined what constituted treason so that it would not be “malleable after the fact.” He is making the point that “abuse of power” is as vague as “maladministration.”

1:07 PM: McConnell says to expect “several hours” with a break in the middle.

1:06 PM: Roberts gavels in the Senate and the final day of closing arguments resumes.

12:50 PM: After last night’s remarks by Robert Ray and Alan Dershowitz in prime time, Trump’s lawyers, unlike the Democrats who droned on and on, are expected to wrap up their closing arguments without using all of their allotted time.

Six days til Iowa. @JoeBiden addressed Senator Ernst’s remarks last night. “You can ruin Donald Trump’s night by caucusing for me and you could ruin Joni Ernst’s night as well.” pic.twitter.com/WIckdrVClg

“Well, I think that there’s still some discussion about how we will have an opportunity to hear from Mr. Bolton,” Sen. Lisa Murkowski said.

“I think Bolton probably has something to offer us, so we’ll figure out how we’re going to learn more,” the Alaska Republican said.