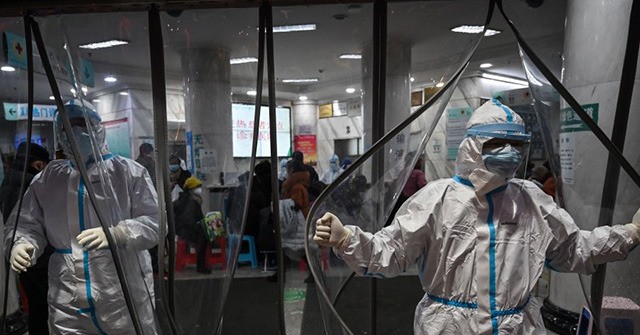 Government health workers in China are actively refusing to test likely cases of the newly discovered coronavirus originating in central Wuhan city, a report claimed on Monday, echoing witness accounts that Wuhan hospitals turned them away despite displaying telltale signs of infection.

Chinese doctors revealed on January 20 that a new strain of coronavirus, the same grouping of viruses as the one responsible for the deadly 2003 outbreak of Sudden Acute Respiratory Syndrome (SARS), had begun spreading in Wuhan, likely from the consumption of wild animal meat. The revelation occurred nearly a month after authorities shut down the wild game and seafood market believed responsible for selling the meat in question, leading many to wonder what took so long to warn local health officials and civilians.

By Tuesday, authorities had identified 4,682 cases of novel coronavirus worldwide, the overwhelming majority of them in China. Of those infected, 106 people have died, all in China. Europe, North America, and Australia have all identified cases, but none in critical condition.

Viral infection is typically accompanied by flu-like symptoms: fever, difficulty breathing, and coughing, among others. These symptoms, particularly in sensitive patients, cause pneumonia, which can lead to death. Chinese doctors have warned, however, there is a possibility that asymptomatic carriers are also contagious.

The Epoch Times, a U.S.-based newspaper that often focuses on human rights abuses committed by the Communist Party of China, cited interviews on Monday with an unnamed “insider” and an “independent journalist” within Wuhan, both of whom said that Chinese doctors were not testing people who requested it showing symptoms of infection. The party is significantly limiting access to testing kits, which makes it more difficult to confirm cases of novel coronavirus — thus suppressing the official number of known cases of the disease.

“Medical personnel at these hospitals [in Wuhan] have said that the number of kits they are supplied is less than 10 percent of what they need to test patients,” the Epoch Times noted. “Now these hospitals claim that their responsibility at present is to provide treatment only, and they will not perform any diagnoses. Patients who are seeking a diagnosis are unable to get one and find themselves in a desperate situation.”

The alleged “insider” told the newspaper that Chinese public health officials initially significantly limited testing for the virus to maintain the appearance that the outbreak was in control. When cases of the virus began surfacing internationally, Beijing was cornered into offering more realistic numbers of infection, creating an artificial surge in the number of cases.

“Initially, there were several days in a row when there was not a single confirmed patient with Wuhan pneumonia. But when other countries identified patients among people [traveling] from China, the CDC was forced to increase its reported cases,” the “insider” is quoted as saying. “That explains why all of a sudden China reported more than one hundred newly confirmed cases in a couple [of] days. They are manipulating the tally. The real number of patients is far greater.”

Now that China feels compelled to test for cases, the “insider” claimed that officials are cherry-picking individuals hoping to choose the ones likeliest to recover. They are actively choosing not to test health workers, as a higher number of infected workers would indicate that Wuhan did not do enough to protect them.

The Epoch Times report corroborates evidence surfacing since China first admitted the virus was spreading from other reports citing locals in the city who said hospitals turned them away. Perhaps the most high-profile such case is that of the family of Chinese environmentalist Xu Dapeng. Xu, founder of the Friends of Nature NGO — the largest environmental group in the country — was pronounced dead three days after China announced the discovery of the new virus. Xu’s official cause of death is “pneumonia” — the same as his wife, who died ten days before him. According to Radio Free Asia (RFA), Wuhan doctors refused to test him or his wife for coronavirus, then refused to test their still-living daughter, who had ample exposure to her dying parents. They have also refused to isolate Xu’s daughter or anyone in contact with the dead couple, allowing for potential further contamination.

RFA inquired with the local Center for Disease Control (CDC), which confirmed that only state-approved individuals can receive testing for coronavirus.

“An official who answered the phone at the Wuhan CDC confirmed that health authorities aren’t taking reports of infections or deaths or isolation inquiries from members of the public, only from hospitals,” RFA noted. “If hospitals don’t report a case as being suspected nCoV, then the relatives of the infected patients are left to their own devices, the official said.”

Similarly, a phone call by the Epoch Times to a Wuhan hospital yielded confirmation that “the hospital now only accepts patients who were selected and approved by the Wuhan Health Commission.”

Another Wuhan resident, Zhang Changchun, told the Reuters news agency that he and his brother have tried to receive medical care for their mother, who exhibits clear signs of a respiratory infection, but doctors turn them away.

“My brother and I have been queuing at the hospital every day. We go at 6 and 7 in the morning, and queue for the whole day, but we don’t get any new answers,” Zhang said. “Every time the responses are the same: ‘There’s no bed, wait for the government to give a notice, and follow the news to see what’s going on.’ The doctors are all very frustrated too.”

Zhang’s mother has not been tested for coronavirus, even though a doctor reportedly told her that she “almost certainly” has it, Reuters noted.

Chinese state propaganda outlet Global Times admitted last week that Wuhan has failed to conduct adequate testing of suspected patients, but claimed the issue was a shortage of testing kits, not a concerted effort to suppress the true outbreak numbers.

“Shortage of medical resources, especially the testing kits, keep hovering [sic] hospitals in Wuhan, capital of central Central China’s Hubei Province, while the whole China is fighting together against the novel coronavirus originatinged [sic] in the city,” the Global Times claimed. Noting a “severe shortage” of testing kits, the Times also confirmed that hospitals are not allowed to test for the virus without Party approval.

“The reagent [testing] kits were first sent over to local centers for disease control and prevention (CDC) in each place. For now, at least, the CDC remains [sic] the primary users of the agency controlling kits use, whereas the main task of the hospitals is are to diagnose and treat suspected and confirmed patients,” the Times confirmed.

Due to the poor handling of the situation, University of Hong Kong medical researchers warned on Monday that the true number of people infected could be closer to 44,000 in Wuhan alone than 5,000. Gabriel Leung, the dean of the university’s medical school, told reporters that the virus could continue spreading into the summer and that world governments must consider “draconian measures” to contain it, particularly in China.

Despite the ample evidence that the Communist Party failed to react quickly enough to contain the virus, World Health Organization (WHO) Secretary-General Tedros Adhanom Ghebreyesus praised the Party during a visit to Beijing on Tuesday for its “decisive measures” and recommended against foreign states evacuating its citizens from China.

“Tedros said the WHO and the international community speak highly of and fully affirm the decisive measures the Chinese government has taken, and appreciate China’s great efforts in curbing the spread of pneumonia,” Xinhua added.

The WHO, at China’s behest, has for many years banned Taiwan from participating in any global public health efforts despite its wealth and advanced technology. Taiwan has documented seven cases of coronavirus at press time and made a request to the WHO, a United Nations body, to be allowed to partake in the response.