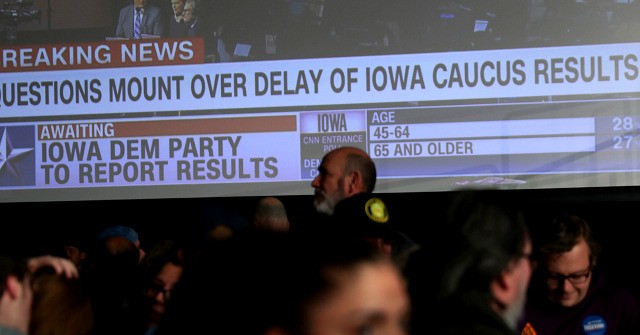 Individuals on both sides of the political aisle are crying foul over the Iowa State Democratic Party attributing the delay in results to “quality control,” sparking further suspicion of what some Democrats fear is a rigged election.

The Iowa State Democratic Party on Monday attributed the delay in the Iowa caucus results to “quality control,” claiming it was doing so “out of an abundance of caution.” The party did not provide an ETA on the results.

“We asked for more specifics than that. We don’t know exactly what the quality control is but as we said. This is the first time in the history of Iowa caucuses  —  they’ve been doing this for half a century — that they are tabulating three different numbers here,” NBC News correspondent Steve Kornacki said:

.@SteveKornacki reports that Iowa State Democratic Party says it is doing “quality control” on results “out of an abundance of caution.” #IowaCaucuses pic.twitter.com/GHwIi4BSj4

The party’s explanation, however, is furthering suspicion among people across the political spectrum.

What the heck is “quality control?”

“What does this mean? Are they rigging the primary (again)?” the Tea Party Patriots’ official Twitter account asked:

BREAKING: The Democratic Party of Iowa has REFUSED to publish any results from the #IowaCaucuses until they complete a process they’re calling “quality control.”

What does this mean? Are they rigging the primary (again)?

lmao what does that mean!

Me: Can’t wait to see the Iowa Caucus results!

Iowa Democratic Party: We are currently doing “quality control” on #IowaCaucuses & don’t have an ETA on results.

Y’all are really going to do Bernie like this AGAIN? #QualityControl

Nothing to see here…

It’s currently 10:45 (ET) and we still don’t have ANY results from the #IowaCaucuses, because the Democratic Party of Iowa is running “quality control.”

They can’t even run a state-wide caucus efficiently,

Yet, they want us to put them in charge of our healthcare?

JUST IN: The Iowa Democratic Party tells @MSNBC it is currently doing “quality control” on the #IowaCaucuses and they don’t have an ETA on the results. Yikes.

This doesn’t seem like the real #IowaCaucus but more like a Christopher Guest movie… No results! Quality control! What is happening?! This one goes to 11! pic.twitter.com/WfIWc4LrO4

“The app may be a little overheated” — Donna Brazile on Fox, spinning Dems’ “quality control” delays in Iowa caucus reporting. 😉

“The integrity of the results is paramount,” communications director Mandy McClure said in a statement. “We have experienced a delay in the results due to quality checks and the fact that the IDP is reporting out three data sets for the first time”:

Just in: Our first official statement from the Iowa Democratic Party.