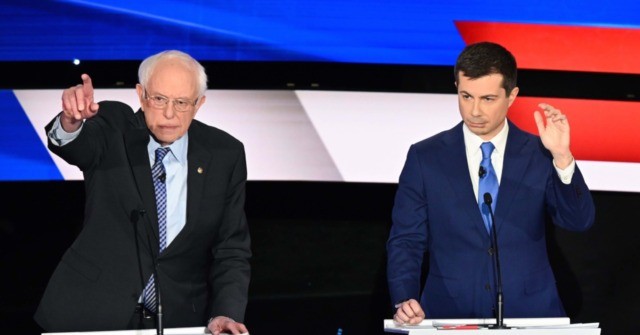 The Iowa Democratic Party announced the final result of Monday’s caucuses on Thursday night, indicating that Sen. Bernie Sanders (I-VT) had won the most votes, but that former South Bend, Indiana, Mayor Pete Buttigieg had won the most “state delegate equivalents” — by a slim 564-562 margin.

Sanders and Buttigieg will receive the same number of delegates to the Democratic National Convention.

However, as the New York Times tally noted, Sanders had a significant advantage in the popular vote — both in the “first alignment” and the final vote tally after the “second alignment,” when voters whose candidates failed to reach 15% in their precincts on the first vote could choose another candidate.

Sanders won over 6,000 more votes than Buttigieg in the first vote, and over 2,500 more in the final vote.

The Associated Press refused to call a winner, citing the confusing and contradictory results, which had been delayed by the failure of an app the state’s Democrats had used to collect data from precincts.

On Monday, Buttigieg declared victory — prematurely, but perhaps accurately. On Thursday, Sanders said he was the winner, given his wide lead (3.5%) on the first ballot. Some observers agreed with him:

AP says it cannot declare winner in Iowa Democratic caucus, based on arcane SDE calculations. But with 99% reporting, Sanders has 6,114-vote (3.5 percentage point) lead in first vote, 2,631-vote (1.6 point) lead in second vote. Neither is too close to call. Sanders won. pic.twitter.com/mXKwgb1OMb

Sanders supporters have been increasingly vocal in accusing the party of rigging the vote against him. In a statement Thursday night, the Sanders campaign disputed the final delegate count and stated that given the discrepancies, the true winner in terms of delegates “will never be known with any kind of certainty.”