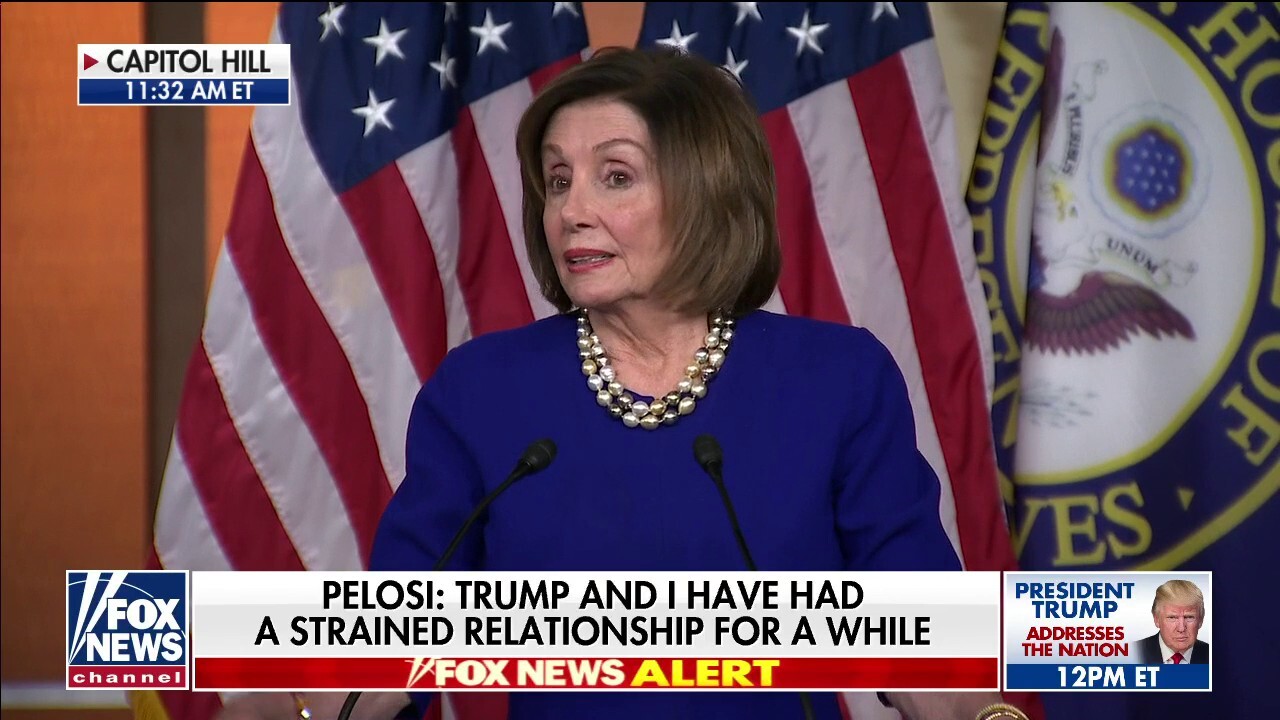 But Tuesday night was all about impeachment.

The Capitol pulsed with apprehension before the address. Would Trump veer off script? Lambaste the speaker on the dais? Upbraid House Democrats?

Yours truly found aides rolling a wheelchair-bound Rush Limbaugh into the Capitol just moments before the speech, to receive the Presidential Medal of Freedom. Congressional Republicans chanted: “Four more years! Four more years!” as though they were delegates on the floor of a quadrennial political convention.

Would Democrats go “Joe Wilson” on Trump, hectoring him from the backbenches?

TRUMP CONDEMNS ‘EVIL’ IMPEACHMENT AFTER SENATE ACQUITTAL: ‘IT WAS A DISGRACE’

One can often distill a State of the Union speech into a moment or two. The same could be said for Tuesday night’s speech. Only this time, the emblematic events never unfolded inside the body of the speech. Episodes just before the speech — and seconds after the speech — crystallized Tuesday night’s address. There were two, visual philippics: Trump refusing to shake the hand of House Speaker Nancy Pelosi, D-Calif. — and the speaker later shredding Trump’s remarks like they were junk mail.

You likely wouldn’t have had either episode were it not for impeachment.

In a few days, few will remember what the president said during his address.

But everyone will recall what unfolded on the dais between the speaker and the president for decades. After all, actions speak louder than words.

Years from now, the history books will note a handful of defining moments about Pelosi’s speakership. She was the first female House speaker. The highest-elected woman in U.S. history — if voters still haven’t elected a female as president. She ushered ObamaCare to passage. And then, there was Pelosi’s decision to peel Trump’s speech in front of a national television audience back in 2020.

A clutch of reporters descended on House Majority Leader Steny Hoyer, D-Md., shortly after the speech to ask if Pelosi’s rebuke was appropriate.

“Nobody yelled out ‘You lie!’” said Hoyer, a reference to Rep. Joe Wilson, R-S.C., ignominiously badgering then-President Barack Obama during a Joint Session of Congress on ObamaCare in 2009.

But frankly, Pelosi did. She didn’t have to say a word.

“I tore up a manifesto of mistruths,” said Pelosi at her weekly press conference Thursday. “I don’t need any lessons from anybody, especially the president of the United States, about dignity.”

The speaker described her action as “entirely appropriate, and, considering some of the other exuberances within me, the courteous thing to do.”

For good or ill, Congress and its traditions course through Pelosi’s blood.

She’s served in Congress since 1987. This is Pelosi’s second turn at the speakership. Her father, the late Rep. Thomas D’Alesandro D-Md., represented Baltimore on Capitol Hill in the 1930s and ‘40s.

Pelosi’s decision to rip up the president’s script reflected the territorial tension between the branches of government. The Constitution mandates a convergence of the legislative and executive branches for the State of the Union. State of the Union speeches are inherently awkward when the House or Senate majority is of one party and the president comes from the other. But the juxtaposition of an impeached Trump — at the time in the middle of his Senate trial — orating in a House chamber, controlled by Democrats, augmented the anxiety.

Pelosi’s visceral reaction encapsulated a turf war. This was inevitable, considering the nature of Trump’s speech and how the speaker believed the president annexed Congress for his own benefit.

Nearly all lawmakers bring a special guest to the State of the Union. It’s often a constituent from law enforcement or someone from the health care community. The guests serve as de facto props, aligned with the views of a particular lawmaker, maximizing media attention and underscoring a political point. Former Rep. Vince McAllister, R-La., brought Willie Robertson of “Duck Dynasty” to Obama’s 2014 State of the Union speech. For this year’s address, Rep. Ted Deutch, D-Fla., invited Fred Guttenberg, father of Jaime Guttenberg, who was killed in the 2018 Parkland school shooting.

It’s like strength in numbers. Boisterous NFL fans wearing the jerseys of their teams to a raucous sports bar on a Sunday afternoon.

Pelosi flagged the president’s recognition of what she termed “constant guests” in the viewing gallery, peering over the House chamber.

“We want a State of the Union,” Pelosi said, “not ‘Let me just show you how many guests I can draw out.’”

The speaker even flagged Trump ceding time to his wife to present the Presidential Medal of Freedom to Rush Limbaugh.

“Do it in your own office,” said Pelosi. “We don’t come to your office and do congressional business.”

The animosity prompted Jake Sherman of Politico to ask the speaker if she’d invite Trump back for another State of the Union. Of course, the voters will have a say in that come November. And don’t forget, nothing says that the president has to deliver a speech to Congress.

Article II, Section 3 of the Constitution dictates that the president “shall from time to time give to the Congress Information on the State of the Union.”

The Constitution is silent on the medium.

George Washington delivered speeches to Congress during his terms in office. But Thomas Jefferson halted the practice, submitting a missive to Congress. It would be more than a century until Woodrow Wilson rekindled the speech tradition. Harry Truman gave the first televised address in 1947. State of the Union never fell in primetime until Lyndon Johnson came along in the mid-1960s.

In such a divided country, in such a toxified political climate, it’s hard to see how the 2020 State of the Union speech could have gone down in any other fashion — punctuated by Trump’s impeachment trial.

But the entire evening was all about impeachment.