MANCHESTER, N.H. – The friction between supporters of Bernie Sanders and Pete Buttigieg played out Saturday night as those two candidates — plus other White House hopefuls — spoke at a major New Hampshire Democratic Party event just three days ahead of the first primary on the 2020 election calendar.

Both Sanders and Buttigieg claimed victory following Monday’s problematic Iowa caucuses. So as Buttigieg drew closer to Sanders in the latest New Hampshire polls, Sanders has turned up the volume in recent days over Buttigieg’s acceptance of big-bucks contributions from wealthy donors.

“Unlike some of the folks up here,” Sanders said, “I don’t have 40 billionaires, Pete, contributing to my campaign, coming from the pharmaceutical [industry], Wall Street and all the big-money interests.”

On Saturday night, as Buttigieg spoke at the Shaheen-McIntyre 100 Club Dinner, Sanders supporters in the crowd inside the Southern New Hampshire University Arena showered the candidate with jeers of “Wall Street Pete!”

Buttigieg supporters – sitting on the opposite side of the arena – countered with cheers of “We need Pete!”

Buttigieg, during his speech, took aim at Sanders – repeating a line that he first started using on the campaign trail in Iowa a week ago as he highlighted the tough task ahead of trying to defeat President Trump in November’s general election.

“We cannot risk dividing Americans’ future further, saying that you must either be for a revolution or you must be for the status quo,” Buttigieg said. “Let’s make room for everybody in this movement.”

Sanders has continuously calls his bid for the White House a “political revolution.”

Later in the evening, when Sanders claimed victory in Iowa during his address, Buttigieg supporters loudly chanted “Pete Buttigieg!”

Longtime New Hampshire Democratic Party Chairman Ray Buckley called the back and forth between the Sanders and Buttigieg supporters “healthy energy.”

Buckley told Fox News he’s not concerned about continued divisions in the party after a nominee is ultimately chosen, saying the candidates “are fully committed to making sure we’re a united party.” 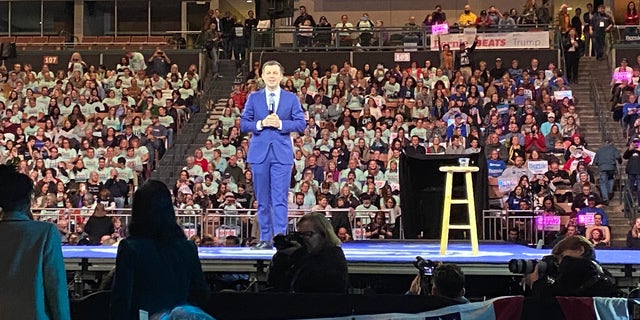 BIDEN ZINGS BUTTIGIEG – SAYING ‘THIS GUY’S NOT A BARACK OBAMA’

Buttigieg, in his speech, also took aim at former Vice President Joe Biden. The two candidates have been trading barbs in recent days – with the 77-year-old Biden pointing to the 38-year-old Buttigieg’s relative lack of experience and Buttigieg spotlighting the potential pitfalls of returning to the politics of old.

Biden’s campaign went up earlier Saturday with a new digital ad suggesting that Buttigieg doesn’t have enough experience to be president.

The spot uses a clip of then-President Obama calling Biden “the best vice president America’s ever had,” before going on to compare crucial successes of the Obama administration with mundane mayoral actions by Buttigieg, such as installing “decorative lights under bridges.”

Buttigieg, speaking to the crowd hours later, tried to make his case.

“Some are asking what business does the mayor of South Bend have seeking the highest office of the land?” he said.

“Americans in small rural towns, in industrial communities — and yes, in pockets of our country’s biggest cities — are tired of being reduced to a punchline by Washington politicians and ready for somebody to take their voice to the American capital.”