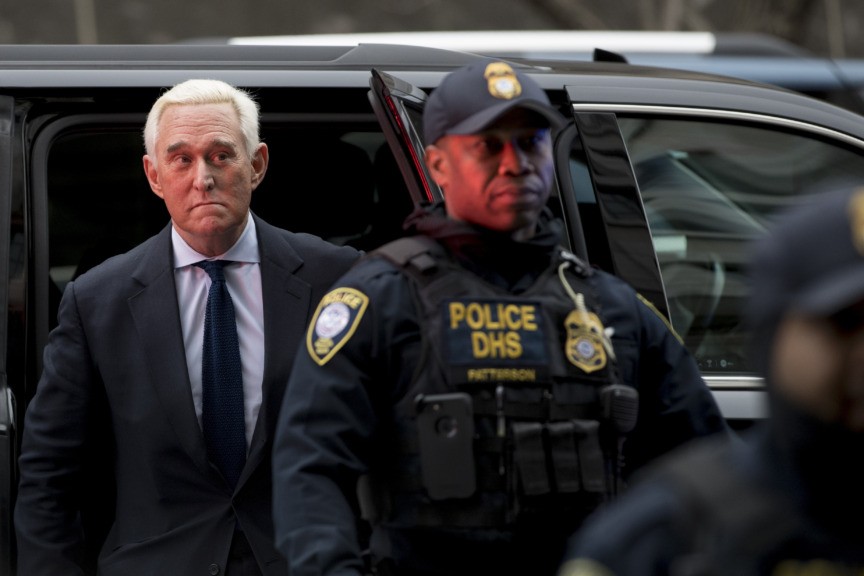 Senate Republicans dismissed Democrats’ demand this week for an investigation of the Department of Justice’s (DOJ) decision to recommend a reduction of the federal prosecutors’ sentencing recommendation of seven to nine years in prison for President Donald Trump’s longtime confidant, 67-year-old Roger Stone.

Senate Judiciary Chairman Lindsey Graham has little interest in investigating the Justice Department’s abrupt reversal of a sentencing recommendation for Roger Stone — rebuffing a Democratic demand sparked by President Donald Trump’s attacks on the federal prosecutors in the case.

Graham, a staunch Trump ally, said Wednesday he did not intend to bring Attorney General William Barr in for testimony aside from the committee’s general oversight of the Justice Department. And while Senate Republicans broadly criticized Trump’s Twitter forays into the case, they said further investigation is unwarranted — dismissing Democrats’ calls for congressional action over allegations of politically motivated favoritism.

In the wake of criticism from Trump via Twitter that the sentencing request is “horrible and very unfair,” DOJ overruled the prosecutor’s request and made plans to reduce the recommendation.

“A Justice Department official, speaking on condition of anonymity, said the decision to reverse the sentencing recommendation was made before Trump registered his displeasure,” Politico noted on Wednesday.

Echoing the unnamed DOJ official, Barr told ABC News in an interview released Thursday, “I’m not going to be bullied or influenced by anybody….whether it’s Congress, newspaper editorial boards, or the president.”

The DOJ decision prompted the four prosecutors who made the sentencing request to withdraw from the case or resign from the department altogether.

Democrats have demanded testimony from Barr about DOJ’s reversal, claiming that politically motivated interference from the president pushed the department to consider lowering the sentencing recommendation.

Sen. John Kennedy (R-LA), echoing Chairman Graham and other members of the upper chamber’s judiciary panel, said there was no reason to investigate the DOJ decision.

“I don’t see anything to investigate unless you have facts that I don’t,” Kennedy declared, according to CNN.

Sen. Chuck Grassley, also a member of the judiciary committee, indicated that he is not open to investigating the DOJ over its reversal of the sentencing recommendation for Stone.

“I think the judge is going to take care of all that and nobody is going to question the judge’s decision,” he said, CNN reported.

“Whatever the judge feels like you need to do with a 70-year-old guy, I trust her judgment,” Sen. Graham added.

Kennedy, Graham, and AG Barr acknowledged that Trump’s criticism did not help the Stone’s case.

“I don’t think he should be commenting on cases in the system. I don’t think that’s appropriate,” Graham told reporters, referring to President Trump.

Referring to Trump’s tweets about DOJ, Barr said they “make it impossible to do my job and to assure the courts and the prosecutors in the department that we are doing our work with integrity.”

“I think it’s time to stop the tweeting about Department of Justice criminal cases,” he added.

“I don’t think the president should be determining what the sentences are,” Sen. Lisa Murkowski (R-AK) said, the Washington Post reported on Wednesday.

Sen. John Thune (R-SD), the number two Republican in the Senate, also indicated that it would be best for Trump not to comment on DOJ matters such as the sentencing request for Stone.

You want to let the legal process to move forward in the way it’s intended to. The president weighs in on a lot of things. He tweeted about it. I guess, so, people perceived that as him having weighed in. But in the end, the Justice Department and lawyers over there need to do what they need to do to make sure justice is being served.

Meanwhile, Senate Majority Leader Mitch McConnell (R-KY) refused to comment on the matter while briefing reporters this week, according to the Post.

On Wednesday, the House Judiciary Committee chaired by Rep. Jerry Nadler (R-NY) announced that Barr has agreed to testify on March 31.

Nadler indicated his committee “plans to press Barr on the Stone case as well as other recent controversies involving the Justice Department in the aftermath of Trump’s acquittal in the Senate’s impeachment trial,” Politico pointed out.

Federal prosecutors requested the seven to nine years prison sentence for Stone for obstructing a congressional investigation, making false statements to investigators, and tampering with witnesses.

In November 2019, a federal court convicted Stone of the charges, which are related to his efforts to spare Trump the embarrassment over the Russian collusion hoax probe by the special counsel, Robert Mueller.