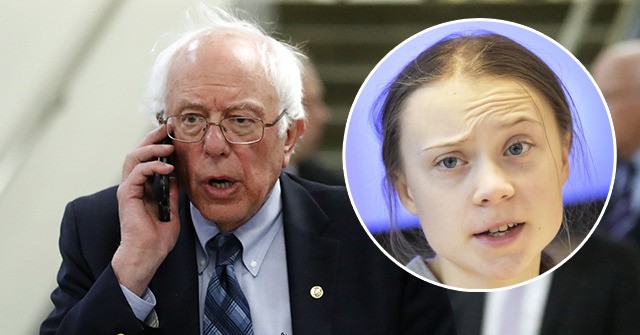 A pair of Russian YouTubers claim that they have nabbed Sen. Bernie Sanders (I-VT) in another prank call from a pair posing as Greta Thunberg and her father, according to their latest video.

The video opens with an individual who sounds like and identifies himself as Sanders, one of the frontrunners in the Democrats’ presidential primary, asking to speak with Greta Thunberg, the teen climate activist who was named TIME Person of the Year. “I just wanted to congratulate you on the extraordinary role you are playing in rallying young people and people throughout the world on this terrible, terrible crisis of climate change,” he says.

“We would like to help you, in your campaign in some way, what is the best thing to do?” the woman pretending to be “Greta” says after a few minutes of general discussion of climate change.

The person identifying himself as Sanders responds: “Well if you would like to help in our campaign that would be wonderful, and we would be very appreciative, because you have generated so much excitement among young people and all people throughout the world. You are admired very, very much.”

He then asks her if she is planning to be in the United States in the next few months. The “father” responds they will be there in February.

“Well, that’d be great, but if you wanted to make a statement in support of our plan and my candidacy, I would be very appreciative,” the person who sounds like Sanders says. “We can bring some folks together with you, and we can have a wonderful meeting if that’s something you are interested in.”

He mentions her making a statement in support of his candidacy and his plans on climate change.

The pranksters then suggested that Sanders collaborate with them and singer Billie Eilish and Kanye West on a “rap video.”

He responded, “That would be terrific… Rap music is very popular. We have a number of rap artists working hard on our campaign.”

The pair suggests that Sanders wear “gold chains and jewelry” and dance in front of fancy cars for the video, prompting a laugh from the man on the phone.

The conversation then turns back to a serious note, as the pranksters say they are going to Russia to discuss climate change, and the man identified as Sanders gives them advice on what to say to Russian leaders.

The callers then bring up Sanders’ 1988 honeymoon in Moscow and unsuccessfully bait him with a question on whether America can be led into “communism.” They suggest that he make former South Bend Mayor Pete Buttigieg his running mate in the 2020 election.

He responds with a chuckle, “OK, well, I will take that under advisement.”

Towards the end, the pranksters suggest that Sanders was “recruited and programmed to work for Russia” during his 1988 trip to the Soviet Union. “Your memory was erased so the CIA wouldn’t track you down,” she continues.

“Is this what you believe?” the man purported to be Sanders responds. “You become [sic] a sleeper agent of the KGB, yes,” the Greta actress says. “Now it’s time to wake up and fulfill your mission: become President of the United States, build communism in the United States, and work for Russia. I will tell you the code phrase and you will remember.”

The pair then begin speaking gibberish, telling the man, “Russian hackers will begin an operation to bring you to power in the United States.”

At this point, the person identifying himself as Sanders hangs up, according to the video presentation.

They tricked Waters into believing that “Greta” and her father had a taped confession from Trump admitting to the exact charges in House Democrats’ articles of impeachment which passed in late December.

The Sanders campaign did not immediately respond to a request for comment.