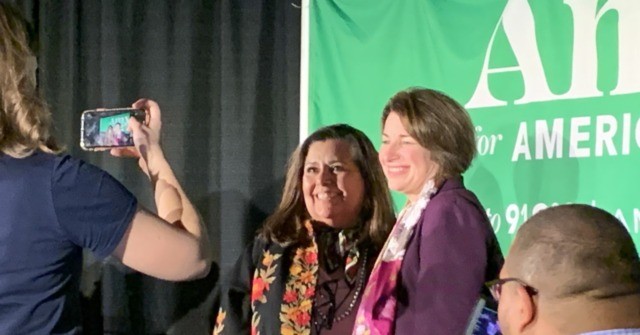 The Minnesota Senator has not spent very much time in the state, but her campaign announced earlier this week that it was opening two field offices and hiring 50 local staff in the wake of her strong third-place finish in the New Hampshire primary.

On Thursday night, Klobuchar did not deviate too far from her familiar talking points and anecdotes, familiar by now from the debate stage and the campaign trail — though she did modify a few lines for the Vegas setting, denouncing President Donald Trump for treating ordinary Americans like “poker chips.”

Her plain-spoken style is exactly what her supporters like about her.

“She’s got common sense,” said Kim, who moved to Nevada from Michigan with her husband to retire.

“She’ll end the chaos and calm things down,” she added.

Tony, an African American event planner who told Breitbart News he was still undecided, said he was looking for “somebody real, somebody different, somebody who’s going to do something for the people.”

“We’ve had the same old white men in office running the country for hundreds of years,” he said.

He said he had been interested in Andrew Yang, the businessman who dropped out of the race after poor results in the New Hampshire primary last week and the Iowa caucuses earlier this month.

Asked whether he would ever support Trump, amidst the president’s push for black support, he said no.

“Trump is charismatic,” Tony said, “but all he did was shake things up.”

Another undecided voter told Breitbart News that he had supported Joe Biden, but was considering alternatives now that “it doesn’t look like Biden will make it.”

Klobuchar promised the voters in the room that she would produce results, and bring Republicans and Democrats together to achieve common goals.

As if to demonstrate her point, she rattled off a detailed explanation of her key policies. However, the jet-lagged Senator — who just arrived in the state from Washington, DC, and had spoken to a Latino voters’ forum earlier in the evening — seemed to lose herself in the details.

After more than half an hour, some people began heading for the exits. But dozens more stayed and waited patiently to take selfies with the candidate.

And though it was nearly 2:00 a.m. in her head, Klobuchar kept smiling.