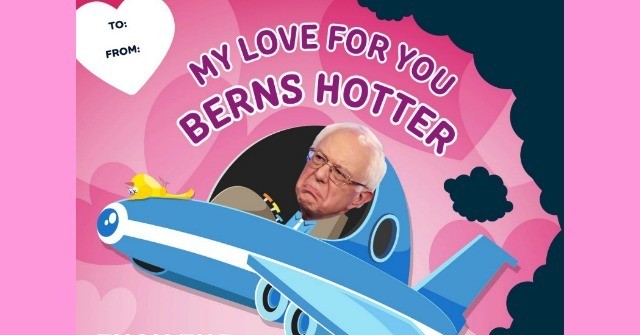 Trump War Room, a Twitter account managed by President Donald Trump’s campaign, has taken aim at Democrat presidential hopefuls with the release of a series of Valentine’s Day cards that mock certain campaign flaws and mishaps.

“Send your loved ones a Valentine from Team Trump,” the campaign wrote in a tweet. “Featuring your favorite soon-to-be EX (presidential candidates).”

Elizabeth Warren: Roses are red, my selfies are fake, when I raise taxes it’s your money I’ll take. pic.twitter.com/CPre5nsBfg

Warren, who has consistently dodged the question of whether taxes for the middle class would increase under her leadership and Medicare for All, was targeted on that issue by Trump’s campaign.

“Roses are red, my selfies are fake, when I raise taxes it’s your money I’ll take,” the card read.

Last September, Warren refused to say if Medicare for All would result in higher taxes for middle class families and dodged the question, only to claim people care more about overall “costs.”

Trump’s campaign also went after Biden, who has recently seen a drop in poll numbers.

The card reads, “I’m falling for you faster than my sinking poll numbers.”

In addition to his drop in the polls, Biden elected to skip his New Hampshire “victory” party earlier this week and instead traveled to South Carolina. Biden garnered only eight percent of the vote in New Hampshire and finished in fifth place.

Pete Buttigieg: The only thing worth more than your love is the money I raised in my wine cave. pic.twitter.com/p51xBU66iQ

Buttigieg was targeted by the Trump campaign for the fundraiser he attended in a wine cave.

“The only thing worth more than your love is the money I raised in my wine cave,” the card read.

Breitbart News’s Charlie Spiering reported that “Photos from the event hosted at the Hall Rutherford winery emerged on social media as the South Bend mayor addressed donors in the elaborate wine cave underneath a chandelier containing 1,500 Swarovski crystals.”

Last February, reports surfaced that Klobuchar ate salad with a fork and made her staff clean it afterward. According to the New York Times, one of Klobuchar’s aides misplaced the fork meant to be used for eating the salad, leaving Klobuchar to find a solution.

Taking aim at her on that issue for the Valentine’s card, Trump’s campaign wrote, “Will you be the comb to my salad?”

Mike Bloomberg: Like the box behind my podium, your love lifts me to new heights. pic.twitter.com/PCQxlkxBUw

Bloomberg, who has been targeted by President Trump as “a 5’4” mass of dead energy,” has often required the use of boxes while speaking to supporters at campaign events.

The Trump campaign card, featuring an image of Bloomberg standing on a box behind a podium stated, “Like the box behind my podium, your love lifts me to new heights.”

Bernie Sanders: My love for you berns hotter than the fossil fuel in my private jet. pic.twitter.com/DzESG9LcfA

Sanders, a self-described “Democratic socialist,” expressed his frustration with President Trump earlier this month after he did not mention climate change during his State of the Union address.

“In the year 2020, how can a president of the United States give a State of the Union speech and not mention climate change?” Sanders asked following the address. Sanders, however, spent $1.2 million on private air travel in the final quarter of 2019.

As reported by Breitbart News’s Hannah Bleau, “Sanders is a huge proponent of the Green New Deal and has proposed a massive $16 trillion plan as a hallmark of his presidential platform, describing climate change as the ‘single greatest challenge facing our country.’”

The Trump campaign took a shot at Sanders on his use of a private jet and wrote, “My love for you berns hotter than the fossil fuel in my private jet.”

Breaking News New York Knicks and Rangers owner James Dolan has tested positive for COVID-19 … making him the first known major American sports team owner to contract the virus. Knicks PR announced Saturday night that the 64-year-old billionaire owner — one of the most controversial figures in sports — had Coronavirus … but made […]

Get all the latest news on coronavirus and more delivered daily to your inbox. Sign up here. New York Knicks owner James Dolan has tested positive for the coronavirus, the team said Saturday night. The diagnosis makes Dolan, who is also the executive chairman of the Madison Square Garden Company, the first major American professional sports […]