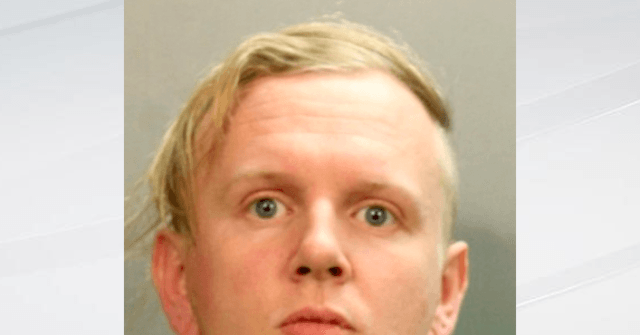 The 27-year-old Florida man who police arrested and charged for driving his vehicle into a GOP voter registration tent told a local news outlet on Friday that he did not intend to hurt anyone.

Police arrested Gregory Timm, 27, over the weekend after he was accused of driving his car through a GOP tent in a Walmart parking lot. He later told authorities, according to the police report, that he did it because “someone had to do something” and added that he did not like President Trump.

News4Jax followed up with the suspect, who is booked at the Duval County jail, on Friday. Describing him as displaying a “friendly and pleasant” demeanor, the outlet reported that Timm was “thankful” that no one was hurt as a result of his actions. The local news outlet also asked the assailant “about his feelings on the importance of voting,” which he apparently agreed is “extremely important.”

According to the outlet:

Gregory Timm, 27, spoke to News4Jax in a face-to-face interview at the Duval County jail on Friday, saying he’s thankful no one was injured and that it’s “amazing how much this story has changed.” It was the first day he was allowed visitors since his arrest.

Timm spoke to News4Jax on Friday about the “divisiveness” of the current political climate in the United States and said it’ll be interesting to see what’s to come in the next year.

He said he intentionally waited about 20 minutes in the parking lot “for people to clear out” of the voter registration tent and that he never intended for anyone to get hurt. No injuries were reported after the incident.

When asked about his feelings on the importance of voting, Timm agreed that it is extremely important that people vote.

Despite his insistence that he waited “for people to clear out,” one of the victims told First Coast News that Timm narrowly missed her with his van.

“I thought he was going to slow down, but he didn’t and he gunned his engine and headed straight,” the woman said.

Authorities charged Timm with “two counts of aggravated assault on a person over 65 years old, criminal mischief and driving without a license,” per News4Jax.

The local news outlet’s coverage drew criticism from various members of the GOP, who accused it of portraying the suspect in a sympathetic light.

“This guy plowed his van through a Republican volunteer tent. Why is the media running with his side of the story?” The Trump War Room asked:

This guy plowed his van through a Republican volunteer tent.

Why is the media running with his side of the story? https://t.co/JbKAJVaGcj

Disgusting. @wjxt4 is now making the man who intentionally drove a car at @realDonaldTrump’s supporters the victim.

“Wondering why we the people do not trust the media anymore? Best example below – really making the man who drove into a GOP tent out to be the victim,” Students for Trump said:

Wondering why we the people do not trust the media anymore?

Best example below – really making the man who drove into a GOP tent out to be the victim.https://t.co/VTqgyvUhpS

Timm apparently told the outlet that he has “more to say” about the incident but has yet to speak to an attorney.