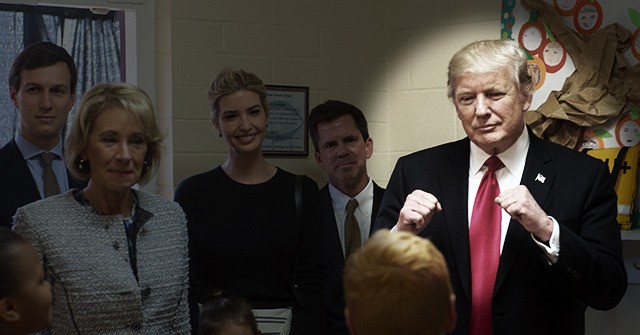 The Washington Post published a longform article Thursday that claims President Donald Trump’s speeches on topics like immigration and national security have intensified bullying in schools across the country.

Authors Hannah Natanson, John Woodrow Cox, and Perry Stein begin with the premise that Trump’s “inflammatory language… has seeped into schools across America. Many bullies now target other children differently than they used to, with kids as young as 6 mimicking the president’s insults and the cruel way he delivers them.”

Their evidence? The reporters say “Trump’s words, those chanted by his followers at campaign rallies and even his last name have been wielded by students and school staff members to harass children more than 300 times since the start of 2016,” according to a review of 28,000 news stories. They also found 45 incidents over that period where children or teens were bullied because they support Trump.

To try to make up for these facts, the authors offer this excuse: “Most schools don’t track the Trump bullying phenomenon, and researchers didn’t ask about it in a federal survey of 6,100 students in 2017.” They then cite a web survey from the Southern Poverty Law Center (SPLC) to suggest that thousands of incidents “never made the news.” This is the same SPLC that one of the Post‘s own columnists says “has lost all credibility” because of its loose, hyper-partisan definition of “hate.” Regardless, the story wallows in anecdotes to press forward with its thesis.

“It’s gotten way worse since Trump got elected,” said Ashanty Bonilla, 17, a Mexican American high school junior in Idaho who faced so much ridicule from classmates last year that she transferred. “They hear it. They think it’s okay. The president says it… Why can’t they?”

Miracle Slover said one of her teachers at a Fort Worth Texas high school was a fan of the president and forced minorities student to sit in the back of the room.

“Every day was something new with immigration,” said Miracle, now 18, who has a black mother and a mixed-race father. “That Trump needs to take [immigrants] away. They do drugs, they bring drugs over here. They cause violence.” The teacher, Georgia Clark, was fired last summer for a series of public messages to the president asking him for help with deporting illegal immigrants from her neighborhood.

The Post does allot a small percentage of its report to the harassment of students who support Trump.

“School staff members in at least 18 states, from Washington to West Virginia, have picked on students for wearing Trump gear or voicing support for him,” the authors write. “Among teenagers, the confrontations have at times turned physical. A high school student in Northern California said that after she celebrated the 2016 election results on social media, a classmate accused her of hating Mexicans and attacked her, leaving the girl with a bloodied nose. Last February, a teenager at an Oklahoma high school was caught on video ripping a Trump sign out of a student’s hands and knocking a red MAGA cap off his head.”

But the overarching theme of the Post’s report is stirring up fear that Trump and his supporters are creating a dangerous atmosphere in our nation’s schools.

However, these anecdotes are contradicted by federal data on overarching trends. According to stopybullying.gov, the media has a responsibility to report on bullying in an accurate way and devotes a large portion of its website to spelling out best practices for reporting on this issue. The Post’s report violates or ignores almost all of these guidelines.

The advice includes a section titled “What the Public Needs to Know About Bullying:”

And while the Post story links to some statistics from the National Center for Education Statistics (NCES), the authors ignore data from the federal body showing a reduction in bullying almost across the board.