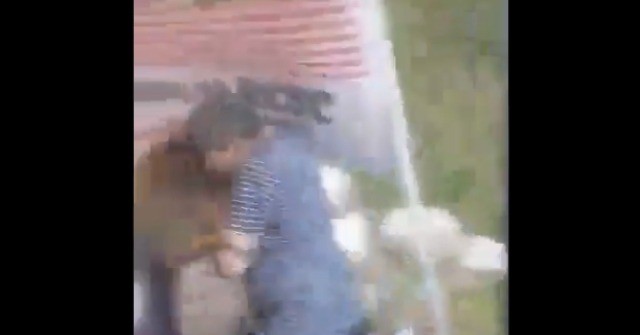 A leftist at the University of California, Santa Cruz (UCSC) was caught on video getting into a physical altercation with members of the school’s College Republicans student group, as well as with free speech activist Hayden Williams. Moments later, the individual was seeing spitting on an American flag, which had fallen to the ground during the scuffle.

Free speech activist Hayden Williams — who was punched in the face at UC Berkeley while helping Turning Point USA recruit conservative students last year — posted a video to his Twitter account on Thursday, which depicts an individual attacking the College Republicans student group at UCSC.

In the video, the individual — who a College Republicans member told Breitbart News is a student at UCSC — is seen getting into a physical altercation with conservative activists, as well as tearing down the College Republicans’ banner, and spitting on an American flag.

SPITS on American flag and calls it a symbol of “white supremacy”!

“Yeah buddy, I think this guy’s trying to assault me,” laughed the individual in question, who can be seen on video appearing to try to rip a Trump campaign flag out of Williams’ hands, which resulted in a scuffle that sent Williams tumbling to the ground.

Moments following the physical altercation, the apparent leftist is seen spitting on an American flag, after tearing down a banner, which read, “College Republicans at UCSC.”

“Assaulting individuals and students standing up for their rights has become commonplace on college campuses in this country,” said Williams to Breitbart News.

In February 2019, Williams was physically assaulted on video in a separate incident at UC Berkeley.

“In a place like UC Santa Cruz, I do not expect justice or recourse from law enforcement, or disciplinary action to be taken by the school,” added Williams. “It saddens me that this is the state of the nation and I hope we can change it for the better.”

The school’s College Republicans chapter president Dylan Temple told Breitbart News that his group was tabling to promote their event later in the day, which featured Williams as a guest speaker.

The student added that before the video started, the leftist — accompanied by one other individual — approached the College Republicans’ table and immediately began destroying the club’s banners, as well as desecrating the American flag.

“To me, the American flag has always represented tolerance, diversity and welcoming people from all over the world to our amazing nation, a nation of great opportunity,” Temple told Breitbart News.

“I will continue to stand with the flag and American values despite the hostile culture of UC Santa Cruz,” he added.

A UCSC spokesperson responded to Breitbart News’ request for comment with the following statement:

Campus officials are aware of an incident that occurred between students on the afternoon of Feb. 7, as members of the UC Santa Cruz College Republicans were tabling near the entrance to Quarry Plaza. UC Santa Cruz police are investigating, and hope to have the investigation completed soon.

UC Santa Cruz is committed to ensuring that all members of our campus community are able to exercise their constitutionally protected rights of free expression, speech, and assembly, and that they are able to do so in a safe environment. Free speech is uniquely important to a university, as it allows for the open exchange of ideas integral to our fundamental missions.

Our campus also champions Principles of Community. Among these principles are the belief that our diversity — in every form — makes us stronger, and that the free exchange of ideas requires mutual respect for our differences. We hold steadfast to these principles.

Breitbart News will continue to report on this story.