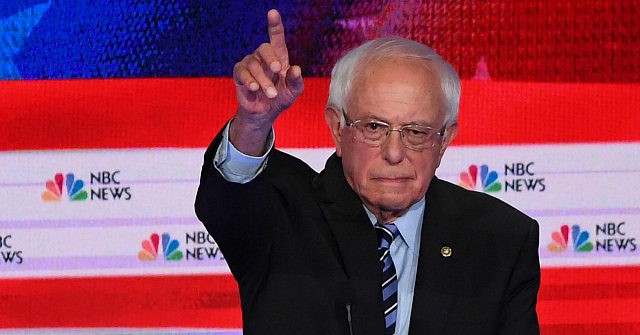 Some of Sen. Bernie Sanders’ (I-VT) rival campaigns are quietly conceding they will not win first place in the Nevada caucuses, as the socialist senator continues to rise in the polls, according to Politico.

Politico reported on Monday that three rival campaigns have admitted they are not expecting to win first place in the upcoming Nevada caucuses, hoping, instead, to place second or third, as Sanders continues to soar in the polls and draw thousands of enthusiastic supporters to his campaign events:

Advisers to three rival campaigns privately conceded over the weekend that the best anyone else could hope for here is second or third. Some of them gape at the crowd sizes at Sanders’ events — like the swarm of supporters who accompanied Sanders, his fist raised, to an early caucus site in Las Vegas on Saturday, the first day of early voting in the state.

While few expect that Sanders can carry more than a third of the vote in Nevada, nearly everyone believes that will be enough to win in a field where the moderate vote remains splintered. It is becoming a source of celebration for Sanders’ supporters and an urgent problem for those who want to prevent him from claiming the nomination.

Once again, the presidential hopefuls will have to reach a 15 percent viability threshold to stand. Some believe Sanders will take a relatively substantial portion of the vote just by maintaining the support of his existing base, leaving the supporters of the remaining candidates split and thereby putting his contenders in more vulnerable positions.

“We’re not talking about him getting 50 percent of the vote, Ramirez said. “But the rest of the field is so fragmented, and he has his base locked, that he can continue winning just by holding onto his base.”

The Vermont socialist is going into the Nevada caucuses with the wind to his back. While questions remain regarding who truly took first place in the Iowa caucuses, Sanders counted his popular vote win as a victory and secured 12 delegates to Pete Buttigieg’s 13. Sanders also squeaked out a win in his neighboring state of New Hampshire, taking 25.7 percent of the vote and nine delegates. Buttigieg fell less than two points behind but pocketed the same number of delegates, giving him a one-delegate advantage overall heading into Nevada.

While Sen. Amy Klobuchar (D-MN) hopes to seize the momentum from her unexpected third-place finish in New Hampshire, the stakes are just as high for Sen. Elizabeth Warren (D-MA) and Joe Biden (D), both of whom hope to breathe life into their campaigns after lackluster showings in Iowa and poor performances in New Hampshire. Neither of them was able to reach the 15 percent threshold required to secure delegates in New Hampshire’s primary.

According to Politico, a staffer to one of Sanders’ challengers “described the new ‘default state of the race’ as one featuring Sanders in his own orbit and everyone else in theirs.”

Sanders has continued to display impressive showings at his recent rallies — a sign of the enthusiasm among his supporters. Last week’s rally in New Hampshire, which featured rock band The Strokes, drew 7,500 attendees, and his Sunday rally in Denver, Colorado, reportedly drew 11,400 people. His campaign described the showing as the “largest rally any presidential candidate has held in Colorado this cycle.”