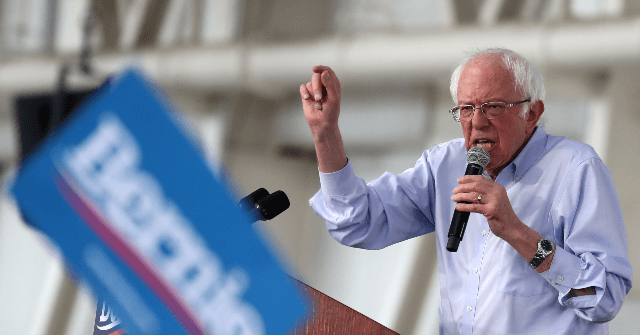 Sen. Bernie Sanders (I-VT) took direct aim at his rising rival Michael Bloomberg (D) during a massive rally at the Tacoma Dome on Monday, blasting his record as New York City mayor and warning him that he is “not gonna buy this election.”

Sanders, along with guests Rep. Pramila Jayapal (D-WA), actor Tim Robbins, and the indie rock band Portugal. The Man, drew a crowd of over 17,000 in Tacoma, Washington, on Monday evening. The presidential hopeful took a moment out of his traditional stump-style speech to send a direct message to his billionaire rival Bloomberg, who is dramatically surging in the polls.

“Today we say to Mayor Bloomberg: we are a democracy, not an oligarchy, you’re not gonna buy this election,” Sanders told the crowd, taking a shot at the former mayor’s record, including what Sanders described as his “racist policies like stop and frisk.”

“We say to Mr. Bloomberg, you are certainly not going to win when you have a record in New York City that included racist policies like stop and frisk which caused communities of color to live in fear and humiliation in New York City,” the presidential hopeful said.

He also criticized Bloomberg for purportedly calling for cuts to programs such as Social Security, Medicaid, and Medicare.

“The American people, working for families all over this country, want an economy and a government that works for all of us — not just a handful of billionaires,” he warned.

“Today we say to Mayor Bloomberg: we are a democracy, not an oligarchy, you’re not gonna buy this election… pic.twitter.com/jFjVdJ2Mwk

“Mr. Bloomberg, like anybody else, has a right to run for president. He does not have a right to buy the presidency,” Sanders tweeted Monday evening:

Mr. Bloomberg, like anybody else, has a right to run for president. He does not have a right to buy the presidency.

“It’s a shameful turn of events to see Bernie Sanders and Donald Trump deploy the very same attacks and tactics against Mike, but the reason is clear,” Sheekey said.

“At this point, the primary is Bernie’s to lose, and ours to win. Bernie knows this,” Sheekey continued. “Trump knows this. That’s why they are united in the campaign against Mike.”

Bloomberg’s campaign confirmed that he will, in fact, participate, giving Sanders a chance to question his rival face to face.

We are excited to see @MikeBloomberg share his vision on the #DemDebate stage tomorrow night for defeating Donald Trump and rebuilding America. See you in Las Vegas. pic.twitter.com/MZY3NmeiU1