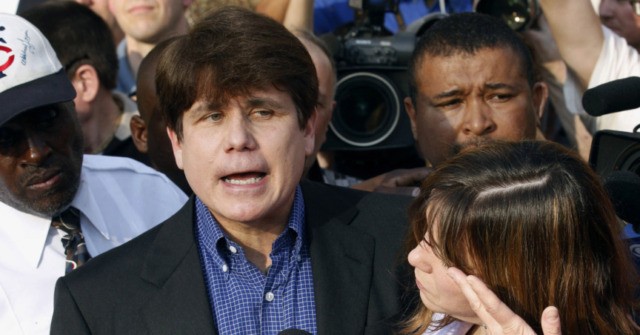 “I watched his wife on television; I don’t know him very well,” Trump said, acknowledging that the former governor appeared on his show Celebrity Apprentice. “Seemed like a very nice person, don’t know him. … I did commute his sentence.”

Blagojevich was sentenced to 14 years in prison after he tried to sell the U.S. Senate seat vacated by former Sen. Barack Obama after he was elected president in 2008. To date, Blagojevich has served over seven years of his prison sentence.

Trump said that Blagojevich was prosecuted by “the same people, Comey, Fitzpatrick, the same group” that prosecuted him, and acknowledged that even though the governor was a Democrat, he deserved release from prison.

“Very far from his children, they’re growing older. They’re going to high school now. They rarely get to see their father outside of an orange uniform,” Trump said. “I saw that, and I did commute his sentence.”

The president has frequently discussed the idea of a pardon for Blagojevich, as he views the 14-year penalty as too harsh just for “being stupid” by discussing something that “many other politicians say.”

The Illinois state legislature impeached Blagojevich and removed him from office in 2009, which led him to appear on Celebrity Apprentice.

Trump ultimately fired Blagojevich after four weeks on the show.

Illinois Republicans have strongly objected to the idea of a pardon.

Trump sent the case to White House lawyers to review despite appearing ready to grant the pardon in 2018.

He also criticized FBI officials for the unfair prosecution of Blagojevich.

“A lot of people thought it was unfair, like a lot of other things — and it was the same gang, the Comey gang and all these sleazebags that did it,” Trump said in 2018.

In January, Blagojevich wrote an op-ed in Newsmax criticizing Democrats for trying to impeach Trump.