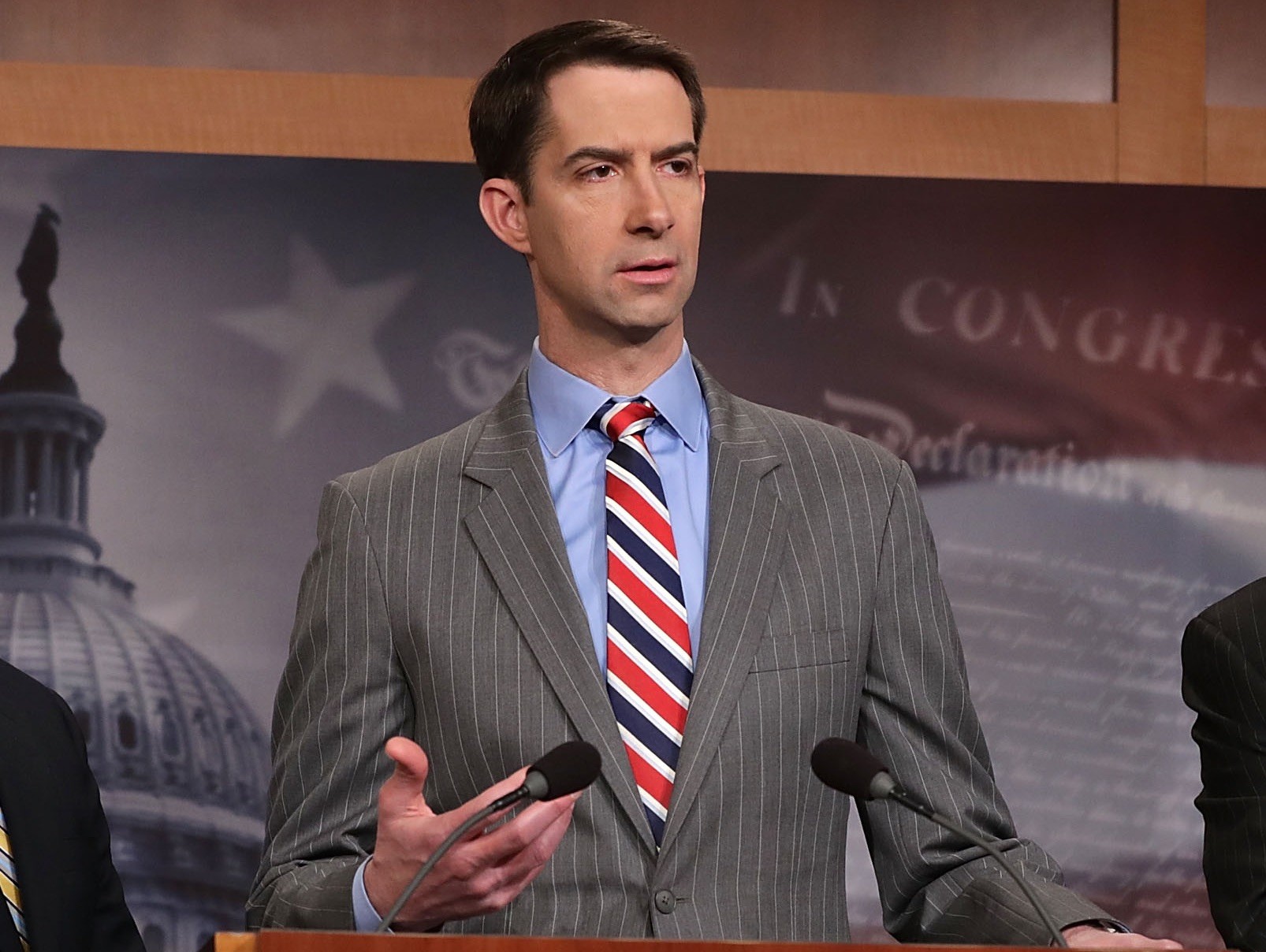 Sen. Tom Cotton (R-AR) has launched a new effort to support fellow veterans in bids for Congress as part of an organized campaign designed to help Republicans secure their U.S. Senate majority and retake the majority in the U.S. House in November.

Cotton, a U.S. Army veteran who served in both Iraq and Afghanistan before his election in 2012 to the U.S. House, told Breitbart News exclusively that he is rolling out a series of endorsements of veterans running in key battleground House districts nationwide this year.

Cotton, in 2014, won a U.S. Senate seat in Arkansas, and he is running for re-election this year unopposed, as the only Democrat to file against him later dropped out of the race, leaving Democrats with no candidate—and Cotton with lots of free time and extra campaign resources to help Republicans nationally.

“In many cases the veterans I’ve endorsed or will be endorsing are first-time candidates as I was in 2012,” Cotton said in an exclusive interview with Breitbart News on Monday afternoon. “I want to provide effective coaching and mentoring to them the way some previous office-holders provided to me in 2012, and help them understand the way they can translate their record of service into the campaign setting. So, for instance, all Americans respect veterans—they respect veterans for their service, and in many cases, like in Jason Church, their many sacrifices, like both of his legs in Afghanistan. That is a great door-opener for them. There’s almost no voter in America who will not listen to that veteran on the campaign trail because of that veteran’s record of service, but then they have to translate that into what they hope to accomplish for Americans in Congress just like they did overseas. So, of course, I am focused on Republican veterans and Republican veterans who share some of my priorities, like controlling our immigration system, getting serious about crime and law and order, trying to stand up to adversaries like China, all of things which are usually not going to be in a veteran’s record of service in the military. So, what I’ve done with some of these veterans and what I’ll continue to do with them is to share some of my hard-won experiences in 2012 as a first-time candidate so they can maybe learn it the easy way. Then, there’s other things too—of course I’ll give them maximum financial support from my political action committee, I raise money for them online and from loyal conservative donors around the country who want to support veteran candidates, and in many cases over the course of the next nine months or so I intend to go campaign with them too.”

Cotton has previously backed other veterans like Reps. Mike Gallagher (R-WI) and Dan Crenshaw (R-TX), as well as Jason Church, who is running in a special election on Tuesday in Wisconsin. But now he intends to expand that effort as part of a broader push to help the GOP solidify its U.S. Senate majority in the 2020 campaign, as well as giving Republicans a chance at retaking the House majority from Speaker Nancy Pelosi’s Democrats.

“So I’ve supported a number of veterans in the past, like Mike Gallagher from Wisconsin in the 2016 cycle and Dan Crenshaw in last cycle and Jason Church in the special election in Wisconsin tomorrow,” Cotton said in the interview. “Given that I don’t have a Democratic opponent in Arkansas this cycle, I wanted to devote more of my effort to helping to elect veterans up and down the ballot for the House and for the Senate as well. Veterans have very strong assets, they are well-respected by our fellow citizens, and they also just need a little help as first-time candidates to learn how to be effective candidates and learn how to run an effective campaign and how to translate their record of service in the military to how they can serve their states and their districts in Congress. So, I’m very excited to be endorsing these candidates like I’ve done in the past, and there will be more to come in the future.”

Pfluger, an Air Force veteran, flew 300 combat hours as an F-22 Raptor fighter pilot against the Islamic State. King served as a JAG officer in the Army Reserves. Driscoll, a U.S. Army veteran, was a Cavalry Scout Platoon Leader in Iraq. Hunt, another Iraq veteran and West Point graduate, was an Apache helicopter pilot in the U.S. Army.

While Democrat Hillary Rodham Clinton did win Texas’s 7th district over President Donald Trump in 2016, it is a traditionally GOP district. It was represented by Republicans for decades, dating back to 1967, and is rated by the Cook Political Report to have a Partisan Voting Index (PVI) of R plus 7. Nonetheless, freshman Democrat Rep. Lizzie Fletcher (D-TX) won the seat in the 2018 midterm elections—but Republicans, including Cotton, given his endorsement of Hunt, think they can win it back in 2020.

Illinois’ 17th district, meanwhile, is one of the 30 vaunted Trump-won districts currently represented by a Democrat. Trump became the first GOP presidential candidate in decades to win the district, defeating Clinton by just under a percentage point. The district, however, is represented by Rep. Cheri Bustos (D-IL)—a Democrat who happens to also lead the Democrats’ congressional campaign and fundraising arm, known as the Democratic Congressional Campaign Committee (DCCC).

While this slate of four endorsements represents his first round of veteran candidates Cotton is backing in 2020, Cotton told Breitbart News he intends to back many more—and believes strong veterans could be the key to retaking the House majority for Republicans in November.

“The path to the House majority runs through the so-called ‘Trump districts,’ where Donald Trump won a congressional district that is currently held by a Democrat,” Cotton told Breitbart News. “And, in a majority of those districts we have veterans running for the Republican Party. Again, I think being a veteran is a door-opener unlike anything else in American politics. And, those veterans in those Trump districts are uniquely positioned to appeal to some of those voters who probably stayed home in 2018 and allowed the Democrat to win those districts. Those voters are going to be coming out in droves in 2020 to vote for President Trump, and I think we’ll have veterans in many of those districts who will help flip those districts and ultimately win back the House as well.”

There are currently 30 districts represented by Democrats that Trump won in 2016, and another 20 or so that Clinton won that Republicans believe are competitive. To retake the House majority in 2020, Republicans need to flip a net 18 seats from the Democrats to GOP control—17 if they win the upcoming special election in California’s 25th congressional district, a battleground that Clinton won in 2016 but Republicans lost in 2018 before now former Rep. Katie Hill (D-CA) was forced to resign in disgrace over a sex scandal.

Many establishment media outlets do not believe the House majority is in play in 2020, but Cotton thinks they are all wrong—as they have been many times before.

“Yet again, the establishment media could not be more wrong. In the winter of 2010, and in the winter of 2018, the establishment media said of course the House is not in play, yet by the fall they were mistaken,” Cotton told Breitbart News. “They are mistaken once again. The House is very much in play, and the path to the majority runs through Trump districts—the majority in which we can have a veteran on the ballot in November. That’s one of the ways we will win back the majority to make sure we don’t see the kind of wasted year that we’ve seen over the last year from the Nancy Pelosi-led House of Representatives.”

Cotton has already, as he mentioned earlier in this interview, endorsed another veteran in Jason Church in Wisconsin’s 7th congressional district GOP primary in the special election. That is a district Republicans intend to hold in the special election called after now former Rep. Sean Duffy (R-WI) stepped down last year. Church lost both of his legs in an IED attack while serving in the U.S. Army in Afghanistan.

Cotton has also already endorsed another veteran, retired Army Gen. Don Bolduc, for U.S. Senate in New Hampshire. Bolduc is running for the GOP nomination for a shot at taking on Sen. Jeanne Shaheen (D-NH) in November. Bolduc retired at the rank of Brigadier General after a 36-year career in the U.S. Army.

Overall, look for Cotton to aggressively engage on the 2020 campaign trail with GOP candidates who served their country in uniform before running for office—a strategy he thinks could undercut the strategy that put the Democrats in the majority in the House last year.

“In many of the districts where the Democrats made their majority in 2018, they did in fact run veterans,” Cotton told Breitbart News. “I think that proves my point that Americans are willing to give an audience to veteran candidates, even first-time unknown candidates, especially against establishment traditional career politicians. It just so happens that many of those Democrat veterans, I strongly disagree with their political views—whether it’s supporting the most grotesque kinds of partial-birth abortion or trying to take away the guns of law-abiding Americans or having open borders for America—but it is an example of the point I’m making, which is the American people are willing to give any veteran of any political stripe at least an audience to make the case about how they will improve the lives of voters once they’re in political office, just like they did when they risked their lives while they were in the military. That’s why I think it’s so important to put this effort in this cycle into trying to recruit and coach more veteran candidates as Republicans.”