In the pic, Lopez, 50, showed off her toned body in a simple white bikini that left little to the imagination. “Relaxed and recharged,” she wrote in the caption.

Rinna, 56, decided to copy the Super Bowl halftime performer with her own sultry swimsuit snap.

“Not Relaxed and Recharged,” joked “The Real Housewives of Beverly Hills” star as she posed in a leopard print bikini.

Rinna made head turns when she showed up in JLo’s iconic Versace dress at the Casamigos’ annual Halloween bash in Beverly Hills last October. JLo originally rocked the ensemble at the 2000 Grammy Awards.

“I saw that on Instagram. Actually Alex [Rodriguez] sent that to me — he’s like, ‘look!’” JLo told Access Hollywood when asked at the time about Rinna’s costume. 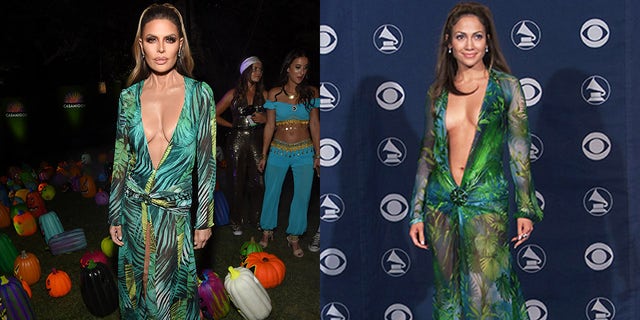 “It was really, really cute. She looked awesome,” Lopez said of the dress.

Rinna, like JLo, works hard at her fitness. “I do yoga. 25 years of it,” the mom of two told People magazine. “I spin and hike too. I’m real consistent. Like really. I really love the combination of SoulCycle and yoga. It keeps me balanced and sane.”

In terms of her diet, Rinna calls herself a “dirty vegan.”

“I don’t love to use the word diet because if I do, I’ll just want to eat 10 times more,” she explained. “Moderation is key. I’m mostly plant-based — but if I do need to eat some meat, I’ll have it.”