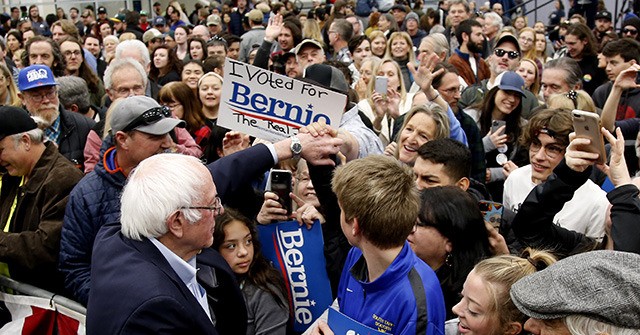 Early voting totals in Nevada are signaling an impressive turnout ahead of Saturday’s highly anticipated caucuses, with 36,000 Nevada Democrats casting ballots within the first three days.

Early voting in Nevada kicked off last Saturday across 80 polling locations around the state.

According to The Nevada Independent, “More than 36,000 Nevadans opted to vote early in the first three days of Nevada’s Democratic caucus — the first time that the unique early voting option has been available in a contest of presidential preferences.”

While it noted that the total turnout from the full four days remained unavailable, it reported that it could top the 84,000 turnout seen in the Democrat Party’s 2016 caucus, when early voting was not an option.

Jon Ralston, editor of The Nevada Independent, said the unofficial numbers indicate a surge in early voting on Tuesday, which he reports was “about the same as the first three days COMBINED.”

NEWS: Stunning last day of turnout for Nevada caucus: Not
all ballots counted but the number Tuesday was about the same as the first three days COMBINED. Upwards of 33,000. So about 70,000 total.

With early voting over, the Nevada State Democratic Party now has three days to process the votes that came in from across the state. Those results will flow to precincts on Caucus Day, where they will be factored into the action at those sites.

Still, not all voters are confident about what happens next. Some Sanders voters said they fear their candidate might win the popular vote but not the delegate math.

“I think caucusing is all stupid because just the math doesn’t add up. Like all the rounding. Like how can Bernie get 3,000 more votes but still get the same amount of delegates?” said Eric Larson, 19, who voted at the University of Nevada, Reno’s early voting site. “It just doesn’t make any sense to me. I think it should be primary. Whoever gets the most votes wins.”

Play video content Breaking News CNN Chris Cuomo says his initial coronavirus symptoms were very similar to the flu … and now he’s worried about passing the virus a long to his family as they quarantine at home. The CNN anchor just gave the lowdown on his diagnosis … explaining how he first thought he […]

Dr. Deborah Birx on Tuesday said that medical experts failed to understand the seriousness of the coronavirus because of incomplete data coming out of China. “I think the medical community interpreted the Chinese data as that this was serious but smaller than anyone expected,” she said. “Because I think probably we were missing a significant […]