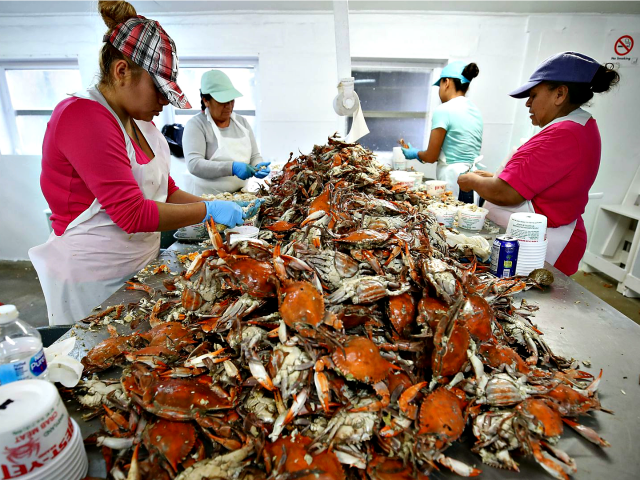 Top officials at the Department of Homeland Security will import 45,000 extra foreign workers for GOP-aligned small businesses, according to a report by the Wall Street Journal.

The Department of Homeland Security plans to announce the additional seasonal-worker visas next week, an administration official said. They will become available in two waves: the first 20,000 will be immediately available, while employers can apply for the remainder for jobs beginning June 1.

It wasn’t clear whether the White House has fully signed off on the numbers, and an administration official cautioned they could change.

The additional visas are being made available ahead of the summer, when demand for short-term work is typically highest.

Acting Homeland Security Secretary Chad Wolf “has made no decision yet on the issue,” a DHS spokesperson said. “Any numbers reported on at this time are being pushed to press by junior staff who are not privy to all of the discussions taking place.”

Legislators in Congress have added a provision in the 2020 funding bill which allows DHS to award additional visas. That back-door measure allows the legislators to avoid public blame for importing the workers, while also allowing the legislators to get credit from donors for pressuring the DHS to import the extra workers,

The H-2B program is one of many programs that allow companies to import roughly 1.5 million white-collar and 500,000 agriculture and blue-collar contract-workers in jobs that otherwise would have to be performed by Americans and machines. The blue-collar workers are imported via the H-2A, H-2B, and J-1 visa-worker programs.

The leaked plan creates political risks for the GOP politicians who oversee Wolf because it exposes the gap between the two halves of the GOP’s base — employees and employers.

For example, the proposed H-2B expansion undercuts the efforts by President Donald Trump and GOP legislators to campaign for re-election by touting blue-collar wage-gains amid a “Blue Collar Boom.”

In the 2020 election, Trump may face claims that he did not protect underpaid Americans from H-2B and other visa workers — including the roughly one million Indian graduates working on contract jobs throughout the high-tech sector.

The WSJ reported a warning from RJ Hauman, the government relations director at the Federation for American Immigration Reform:

If President Trump wants a second term, he needs to keep blue-collar jobs growing at the fastest rate in years by refusing to give immigration-related handouts to employers.

The H-2B program is also coming under investigation from Democrats following the claim that Louisiana companies improperly imported several hundred Mexican workers — via the H-2B visa program — to construct a natural-gas export terminal.

The WSJ news leak also comes the day after an editorial in the Wall Street Journal urged the administration to offset rising wages by importing more workers.

Corporate profits have been declining as employers increase wages to hire scarce blue-collar workers … corporate profits could soon drop to historic lows, which could reduce business investment and GDP growth. Maybe the only short-term fix is to increase legal immigration—unless Americans want to see their living standards decline and more jobs exported.

DHS chief Wolf formerly worked as a lobbyist for the NASSCOM trade group, which lobbies to protect white-collar outsourcing.

In December 2020, House Speaker Nancy Pelosi shut down a proposed H-2B expansion, so putting Democrats in a position to slam Trump and GOP legislators during the 2020 election for betraying blue-collar workers.

Pelosi sides with unions to block employers’ push to double H-2B visa-worker inflow. That’s a useful win for higher wages – but it comes after Pelosi OKd a huge inflow of cheap H-2A farmworkers who can transform rural workforce & sideline many Americans.https://t.co/Co15C1UeWk

Also, China’s coronavirus epidemic is stalling economic growth in the U.S. tourism business, likely pushing Americans out of tourism jobs and freeing them up for other seasonal jobs. Breitbart News reported:

“Total new orders fell for the first time in over a decade. The deterioration in was in part linked to the coronavirus outbreak, manifesting itself in weakened demand across sectors such as travel and tourism, as well as via falling exports and supply chain disruptions,” [Chris Williamson, Chief Business Economist at IHS Markit] said. “However, companies also reported increased caution in respect to spending due to worries about a wider economic slowdown and uncertainty ahead of the presidential election later this year.”

The H-2B program is strongly supported by the nation’s landscaping industry, as well as by many hotels, restaurant and resort firms, and forestry firms.

The landscaping firms support the H-2B program because they have great difficulty hiring Americans, in part, because their work is tough, outside, and seasonal. Moreover, the many small landscaping firms are the last choice of young men who can find easier or better paid year-round jobs. Even when the landscapers invest in machines, they still need young men for long hours of work — and their customers are reluctant to pay the high marketplace wages needed to pull Americans from nearby jobs.

It’s the height of landscaping season and Shayne Newman, President of YardApes, Inc. is grappling with the biggest challenge he’s faced in his 28 years in the business. Learn how the H-2B Cap is effecting Newman and the entire landscape community. https://t.co/lyX8CAkHdp #SaveH2B pic.twitter.com/G110nLPXCu

Many H-2B jobs are for hotel and restaurant work that begin and conclude outside the normal university or K-12 breaks. But the J-1 program brings in a very large number of resort workers.

The H-2B program is also used by multi-state forestry firms to minimize the hiring of rural Americans.

Moreover, the federal government awards the H-2B visas by lottery, instead of handing them to the firms which offer to pay the highest wages or can show the greatest recruiting difficulties, such as shrimp boats in the Gulf of Texas.

However, millions of young Americans fell out of the labor force after the 2008 crash. Many are returning to seek jobs as wages nudge up for blue-collar Americans. Breitbart News reported in January:

But the H-2B program is also supported by elite media in Washington D.C., which have repeatedly worried that fellow Washingtonians might be denied cheap crabmeat if Maryland’s crab companies are forced to pay ordinary Americans at marketplace wages.

The hot economy and the popular curbs on the H-2B program are pushing companies to import workers via other programs, such as the huge J-1 program. Summit Daily reported November 26 that:

Vail Resorts — which owns and operates five Colorado resorts, including Breckenridge Ski Resort and Keystone Resort in Summit County — has found a way to deal with the [H-2B] cap and hire the right amount of seasonal workers.

[Spokeswoman Loryn] Roberson said Vail Resorts was able to get the visas and workers it needed by starting early and moving toward less limited visas types.

“The process started in July, and we successfully completed the multiple steps required to obtain the authorizations,” Roberson wrote in an email. “In the last several years, we have shifted our hiring strategy because of the changes to the visa program that have made it more challenging for companies to get H-2B visas. We’ve slowly been moving away from using them, utilizing others visas like J-1 visas.”

The company used the H-2B program in December 2019 to hire ski instructors.

“The president needs to hear from his base  … early and often,” Daniel Horowitz, editor of Conservative Review, told Breitbart News.

Now is precisely the time to stand up and not stand down out of fear of pressuring the president. He wants to be pressured [by the base because] it is very hard for the president to go in one direction when 100 percent of the pressure inside the administration is headed in the other direction. The mistake that Trump supporters make is that they wait until it is too late and the president feels compelled to go with the swamp. The time to get to the president is early and often.