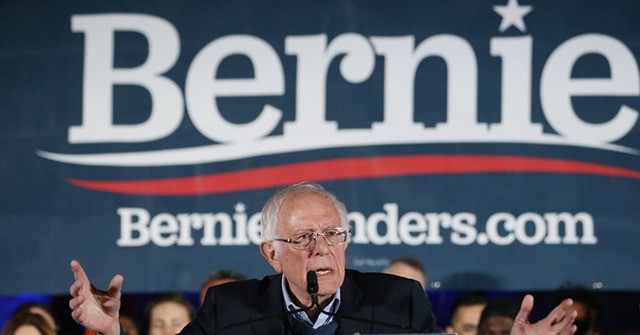 Justin Horwitz, a Democrat campaign strategist and key supporter of Democrat frontrunner Sen. Bernie Sanders (I-VT), appeared on Breitbart News Saturday and highlighted the “remarkable” stance of Sanders’ competitors, who he said are “condoning the theft of the nomination from Bernie.”

Horwitz, a political strategist who works with local, state, and national campaigns, spoke to Breitbart News Washington Political Editor Matthew Boyle on Saturday about the Democrat Party’s seeming attempts to rig the election against the socialist senator and slammed Sanders’ counterparts for demonstrating that they are okay with it.

“It’s pretty remarkable. I think it’s what everybody thought the DNC was going to do. Every candidate except for Bernie Sanders basically is condoning the theft of the nomination from Bernie,” Horwitz said, referencing a moment during the Las Vegas debate where all of the candidates —  minus Sanders —  refused to say that the candidate with the most delegates should be the nominee, regardless if it is a majority.

“We’ve got the candidate with the most votes, most donors, most doors knocks, most phone calls made, basically up 20 points in the polls, and everybody is now saying if he gets the most votes and has the most delegates going into the convention, they’re all fine with stealing it from him,” he continued, noting that it is not just one or two candidates.

“It’s all of them, and it’s pretty remarkable. I don’t think there’s any precedent for it with the exception maybe of 2016, when they hinted they would try to steal it from President Trump but they ultimately didn’t,” Horwitz said.

Indeed, Sanders was the only candidate on the Las Vegas debate stage to say, emphatically, that the candidate with the most delegates going into the convention should be the nominee:

MSNBC’s Chuck Todd asked the candidates if the person with the most delegates at the end of the primary season should be the nominee even if they don’t have a majority of the delegates. Only one person on stage had a different answer from the others. #DemDebate pic.twitter.com/owrJtetRjh

“Whatever the rules of the Democratic Party are, they should be followed,” Michael Bloomberg (D) said.

“But a convention working its will means that people have the delegates that are pledged to them and they keep those delegates until you come to the convention,” Sen. Elizabeth Warren (D-MA) declared.

“Play by the rules,” Joe Biden (D) said, adding, “Let the process work its way out.”

Pete Buttigieg (D) said the leading candidate should not get the nomination “until there’s a majority,” and Sen. Amy Klobuchar (D-MN) followed her competitors in the call to “let the process work.”

“Well, the process includes 500 super delegates on the second ballot. So I think that the will of the people should prevail, yes. The person who has the most votes should become the nominee,” he said.

“Thank you, guys. Five noes and a yes,” Todd concluded.

The only way, Horwitz added, to stop the Democrat National Committee (DNC) in its purported efforts to derail Sanders’ bid is by “hundreds of thousands of Bernie Sanders supporters” making their way to the convention to “ensure that the nomination is not stolen from him.”

“They need to see his grassroots support in person to ensure that this does not happen,” he added.

Horwitz also reacted to the Washington Post report that broke on Friday, suggesting that Russia is trying to assist Sanders, calling it “ridiculous.”

“The timing of this makes it pretty obvious what this is. It’s a hit job on the senator. You’ve got foreign countries that are going to try to interfere in our elections. Whether it be Russia, China, Saudi Arabia, it’s inevitable. All we can do is our best to stop it. But to break this story the day before the Nevada caucuses, for everybody to be getting breaking news alerts from the New York Times and Washington Post, Russia helping Bernie Sanders, it’s absolutely outrageous,” he said, warning that the “smears” will backfire.

“MSNBC and CNN with their attacks on Bernie, which are disingenuous, will not work,” he said.