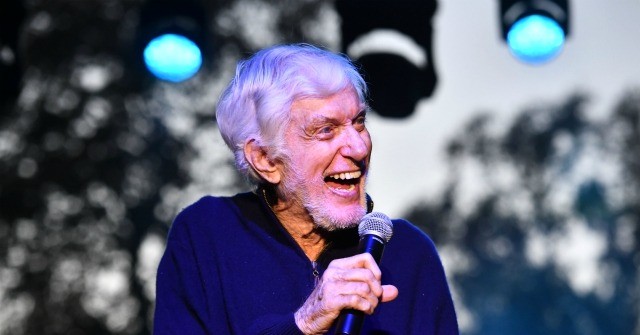 Sanders, 78, touted the video endorsement from the Mary Poppins legend, 94, in an apparent effort to appeal to older voters. Van Dyke described himself in the video endorsement as a “very enthusiastic” Sanders supporter and warned that American democracy will cease to exist if Trump wins the election in November.

Describing the 2020 election as the “most important “ election since the end of World War II, the Emmy award-winning star said, “another four years of the current administration and we won’t have a democracy anymore.”

“Four more years of no concern about the climate. We must get him out of there. Democratic principles are flying out the window. He has assumed authority beyond what the president is allowed and he’s going to get worse,” he explained.

“He never has changed his attack because of pressure from the outside or when he felt the wind was blowing another way. He stuck with who he is and what he believes.” –Dick Van Dyke pic.twitter.com/j8bKHBlCkT

“The age question keeps coming up. I know that I’m 20 years older than Bernie. I have all my marbles. I could run for office if I wanted to. So I don’t think age — it really doesn’t matter except for his experience and the years he’s put in,” he argued. “And I can’t understand why, according to the polls, he’s having problems with older citizens like me. Why wouldn’t an older citizen vote for somebody with that kind of record and with that kind of experience and honesty?”

“I want to urge my generation to get out and vote for him, please,” he begged, touting the socialist senator’s purported consistency.

“Bernie has been consistent with his policies ever since I first met him when he was in the Senate,” he said, adding, “No, I think somebody younger, like Bernie, is just a perfect candidate. Yeah, hell be around a long time.”

Van Dyke’s plea evidently worked on some, including actor-producer Vincent D’Onofrio, who said the endorsement and plea “could get my vote.”

This is the first person in which I’ve heard whom I respect and trust speak about their support for @BernieSanders. No joke.
The truth is It makes me feel better about Bernie I have to say.@iammrvandy thank you sir this could get my vote.
Mr. Van dyke is not a bully. https://t.co/NKPTFFaHaV

This is not the first time Van Dyke has expressed support for Sanders. He stumped for the socialist senator in 2016, once again urging his generation to back his candidate and calling him “the sanest man in America.”

“What I want to say to my contemporaries is, as Bernie says, in the 50s and 60s, real democracy was really working from the bottom up, like it’s supposed to. There were no economic crashes during those decades because regulations were in place,” he added. “We need the person who can break the stranglehold that corporate America has on this country right now.”